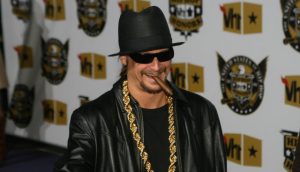 Performer Kid Rock stated that he would cancel any stop on his new “Bad Reputation Tour” if any of the venues where he is scheduled to play try to enforce COVID-19 restrictions.

www.facebook.com/watch/?v=261798569428659
The musician made the announcement about the potential cancellations during a Facebook video posted on Friday, just before the tickets went on sale at 10 a.m.
“You’re going to be getting your money back because I won’t be showing up, either,” Kid Rock went on to say in the post on his Facebook page. “If you think I’m going to sit out there and say don’t tell me how to live, ‘We The People,‘ while people are holding up their f***ing vaccine cards and wearing masks, that s*** ain’t happening.”
The musician then stated that there were certain cities that were scratched off the list for the tour due to their coronavirus restrictions.
“We actually scratched Buffalo, New York, off the list because of that and Toronto, Canada, and several other cities we were looking at. I don’t want to deal with that s*** either, and I know you don’t,” he continued.
Kid Rock has stated previously that this could be his last big tour.
Via Washington Examiner:

The rapper released a new single earlier this week titled “We The People,” blasting Big Tech, Dr. Anthony Fauci, and the media while chanting in the chorus, “Let’s go Brandon.”