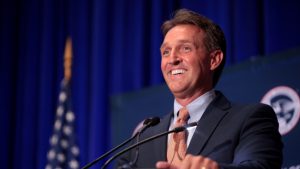 Republican Sen. Jeff Flake, the man who promised to vote in support of Kavanaugh and then more or less walked back on that just hours later when he called for an FBI investigation into the allegations against the SCOTUS nominee, has admitted that the investigation will probably do absolutely nothing.

Republican Senator Jeff Flake admitted in an interview with “60 Minutes” that the FBI investigation – the one he called for – into the sexual assault allegations against Brett Kavanaugh will probably do nothing to clarify what we already know.

“What are the chances that we are going to be in exactly the same place a week from now?” Scott Pelley asked Flake.

Flake responded that there is a strong chance that nothing will change.

“There’s a chance and we knew that. And some of our colleagues said that, ‘We’ll be back here one week from now. It’ll be worse,'” Flake said. “There will be other outrageous allegation that come forward, the FBI will talk to people who don’t want to talk anymore. We won’t be any better off. There is a chance that that will happen. I do think that we can make progress.”

Sitting next to Flake was none other than his longtime friend, Sen. Chris Coons (D-DE), who said that things will be different in a week.

And this guy wonders why folks in the conservative movement despise him so much? Seems pretty obvious. However, let’s spell it out for him in case it isn’t crystal clear.

Conservatives who claim to believe in a certain set of principles and then turn around and abandon those beliefs when it comes time to put them into practice appear to lack a spine and true conviction.

Hence, the lack of admirability for such individuals.

Perhaps one day Flake will get this through his head.