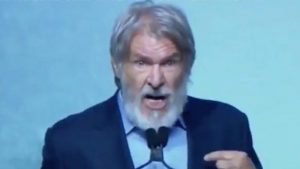 Han Solo himself, Harrison Ford, unleashed the full fury of his wrath on Thursday night during a speech he gave at the Global Climate Action Summit held in San Francisco, where he slammed those who don’t unabashedly buy into climate change as “science deniers.”

Ford showed up to the even sporting a full, white beard and slightly shaggy hair, apparently hoping that by looking like Moses people would actually care about what he had to say on this topic.

As a preacher would giving an impassioned sermon, the actor brought down the volume a bit to dramatically emphasize that whether one is “rich or poor, powerful or powerless, we will all suffer the effects of climate change and ecosystem destruction, and we are facing what is quickly becoming the greatest moral crisis of our time — that those least responsible will bear the greatest costs.”

Ford also warned there’s “a risk if we don’t change the path that we’re on today, the future of humanity is at stake.”

An impassioned- and very serious Harrison Ford- tells the crowd here at the Moscone Center— “I’m here, you’re here, because we *care…if we can’t protect nature, we can’t protect ourselves.” #GlobalClimateActionSummit pic.twitter.com/f5iTjP0Yca

“Let’s shut off our phones, roll up our sleeves & kick this monster’s ass.” — Harrison Ford at #GCAS2018 (📸: @CeresNews) pic.twitter.com/5Ygu2gefPX

It seems like there is some sort of contract that folks in the entertainment industry are forced to sign before they can participate in filmmaking that states they must, at some point during their career, go bat crap crazy and stick up for wackadoo liberal causes.