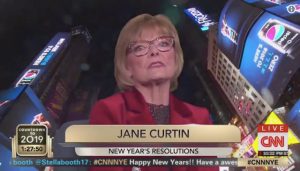 CNN once again aired it’s debauched coverage of New Year’s Eve, allowing many of the individuals who host the event to appear on the air three sheets to the wind, having already bathed in copious amounts of alcohol while on national television.

One individual who made an appearance on the network was former SNL star Jane Curtin. Curtin was asked what her New Year’s resolution was for 2019, to which she replied: “to make sure the Republican Party dies.”

Anyone else interested to know how a washed-up actress that is irrelevant in today’s pop culture realm is going to kill the GOP?

CNN guest Jane Curtin: "My New Year's resolution is to make sure that the Republican Party dies." pic.twitter.com/fHmcpwaFgi

It’s unclear exactly how the former star will accomplish her goal; she didn’t elaborate on the power she wields in order to guarantee that the GOP vanishes.

In November 2017, Curtin joined 35 other women affiliated with “Saturday Night Live” to sign a letter countering sexual harassment allegations against former senator Al Franken (D-MN), who had performed on SNL.

Oprah asked, “So did you consider yourself and Gilda as groundbreakers, pioneers?”

Curtin answered, relating the attitude of former star John Belushi: “No, because we were working too hard to get on the air. So, I mean, we never thought it in a philosophical sense. I think the women writers did, because their battle was constant and they were working against John, who said women are just fundamentally not funny. And so you’d go to a table read and if a woman writer had written the piece for John, he would not read it in his full voice. He would whisper it. He felt as though it was his duty to sabotage pieces that were written by women.”

Again, it’s not clear how someone that most younger folks don’t have a clue about is going to suddenly take charge and wipe out the Republican Party, especially without really having a relevant platform from which to spread her message from.

Guess we’ll just have to wait and see.