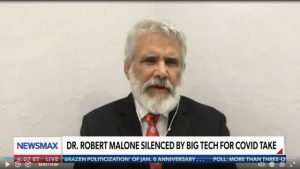 Dr. Robert Malone has weighed in on the recent controversies surrounding popular podcast host Joe Rogan, going on to say that the recent media coverage of his program has been on a scale from naive to a “full-on media war.”

Malone sat down for a discussion with Fox News host Tucker Carlson Wednesday where he said that he’s been fascinated with the overarching lesson that’s come about over the course of the last few weeks, which he says is the fact that appeasement will not take the media target off a person’s back.

“I think as I look back at what has happened, I think he’s been a little naive,” Malone said to Carlson. “Joe bent the knee. He thought that he could concede and they would leave him alone if he basically apologized. And that is not how this game is played. This is full-on media war. You do not — you don’t get a break by saying, ‘I am sorry.'”

Malone, the inventor of mRNA and DNA vaccines, was at the forefront of the initial controversy surrounding Joe Rogan’s podcast, The Joe Rogan Experience.

Rogan interviewed Malone, stirring misinformation accusations after the doctor expressed concern over how the vaccine technology can cause organ damage.

In the days since, Rogan has faced additional criticism, such as when MeidasTouch, a left-wing super PAC, posted a video compilation of the podcaster saying the N-word over the course of 12 years.

Malone went on to tell the Fox News host that whole sections of the population in the U.S. have become frustrated by government policy concerning COVID-19, including African-Americans, parents, and blue-collar workers. He then said that media attacks on Joe Rogan have only served to further alienate those who politically identify as being center-left or independent.

“They have alienated blue-collar center people and unaligned people, which is really what Rogan represents, particularly younger ones,” Malone commented. “Rogan was perceived as a threat on multiple levels. It wasn’t just that he was a good trophy to hang on your wall if you want to gin up more capital for your Hollywood-based Super PAC.”

“The doctor noted that it was about more than vaccines from the beginning, as video compilations could be made of President Joe Biden using racial slurs in the past. Malone also stated that there are other Spotify podcasters who have been critical of COVID-19 treatments,” the Washington Examiner reported.

“This was about taking out Rogan,” Malone finished.