VIDEO: Don Lemon Targets The President, Says ‘It’s His Own Dereliction Is Partly To Blame For This’ 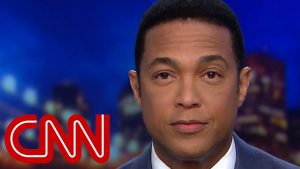 Not long after President Donald Trump revealed that he and First Lady Melania Trump tested positive for the coronavirus, CNN host Don Lemon attacked the president, stating that, “In large part, it’s his own dereliction is partly to blame for this. He chose to go out to rallies. He chose to downplay masks. He chose to not social distance and — and call it a hoax…[I]t’s horrible that the President has this, but he chose to handle the situation this way…Was this inevitable?”

Lemon’s use of the whole “hoax” comment made by the president many moons ago contradicts what has been revealed in an AP fact check that criticized Biden for tweeting a video mashup of Trump that suggested he thought the entire coronavirus was a hoax. The AP said, “At the rally featured in the video, Trump actually said the phrases, “the coronavirus” and ‘this is their new hoax’ at separate points.”

The actual full statement from Trump was, “They tried the impeachment hoax…And this is their new hoax.”

AP continued, “Asked at a news conference the next day to clarify his remarks, Trump made clear he was not referring to the coronavirus itself as a hoax. ‘No, no, no.’”

Trump added, “‘Hoax’ referring to the action that they take to try and pin this on somebody, because we’ve done such a good job. The hoax is on them, not — I’m not talking about what’s happening here. I’m talking what they’re doing. That’s the hoax.” He continued: “Certainly not referring to this. How could anybody refer to this? This is very serious stuff.”

As Curtis Houck noted at Newsbusters, at another moment Lemon stated to Dr. Sanjay Gupta, “Is this a moment of reckoning for the president and this administration? For all of the — all of the pretending or looking the other way and trying to convince people otherwise of the science, for whatever reason — whether it was for, to make sure that he was re-elected, to make sure that he had high standing with the public, or just to — for whatever reason. Because of the economy.”

Lemon went on to add, “Is this now a moment of reckoning that — yes, this is real. It is not a hoax. It doesn’t care if you’re a Democrat or a Republican. It is time to take this seriously, and all the preventative measures that the scientists, the doctors, like Dr. Fauci and Dr. Birx, have been touting for so long?”

Folks, this is just absolutely classless. Isn’t this what the left calls “victim blaming” or something like that? So is every person who gets this virus guilty of negligence, because that sort of seems to be what Lemon is saying here.

That, of course, isn’t true. Sometimes, bad things just happen. However, the fact that Lemon is lying through his teeth is absolutely something he could have avoided had he been more interested in facts than pushing the agenda of the Democratic Party.