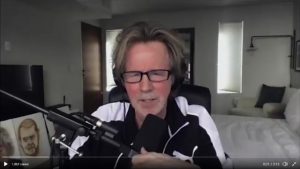 Comedian Dana Carvey, best known for his stellar work on “Saturday Night Live” and the “Wayne’s World” films, recently made an appearance on “The Late Show” with Stephen Colbert where he unveiled his impression of President Joe Biden.

It’s both hilarious and totally accurate. You’ll love this.

“I do him at the town hall, when he’s like the gentle father to the country and he looks like the alien who came off the space ship in ‘Close Encounters of the Third Kind,’” Carvey said to Colbert during the interview.

Apparently referring to former President Donald Trump, Carvey’s Biden then says: “He told, he knew, he knew it floated. He told Bob Woodward — Jo- Joanne Woodward — he told Bob Redford, excuse me. You know. But folks, I care, I care a lot. People are suffering. And I do. And my mother said, you know, that’s the way the cookie is.”

Is this not fantastic? This is what comedy looks like. There’s no sacred cows to a true comedian. Anyone and everyone is a potential target for mockery. It’s all in good fun.

Too bad the leftists out there have destroyed comedy with their insane political correctness.