VIDEO: CNN’s Jake Tapper Shuts Down Interview After WH Official Puts Network On Blast For Not Being ‘Honest’ 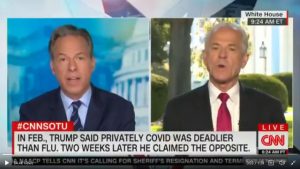 CNN host Jake Tapper shut down an interview held on Sunday with White House Trade Adviser Peter Navarro after Navarro took the news network to the woodshed for not being “honest with the American people.”

This particular interview, which as part of CNN’s “State of the Union” program, only lasted a few minutes before things got heated and was shut down by Tapper. Tapper himself accused the Trump administration of lying to people, so Navarro flipped things around, which did not sit well with Mr. Tapper at all.

Navarro to Tapper: “You just don’t want to listen… CNN is not honest with the American people.”

CNN has earned a reputation for not being completely truthful in its coverage of the news, particularly where Donald Trump is concerned.

No one will likely ever forget when the chryon during a live broadcast of buildings being torched during a riot read “fiery, but mostly peaceful protests.” This one instance tells you everything you need to know about the kind of organization CNN really is.

And that’s just the tip of the iceberg. They have all sorts of shady business over the years, but not nearly as much as attacking Trump on a daily basis for the entirety of his first term. It’s unreal the amount of time that has been dedicated to destroying this man.

If CNN wants to be taken seriously, perhaps they need to dedicate themselves to telling the truth and following it wherever it leads, even if it disagrees with their political slant.