VIDEO: CNN’s Chris Cuomo Says There’s ‘Not a Damn Bit of Proof’ of Voter Fraud in Florida. Gets Owned by Republican. 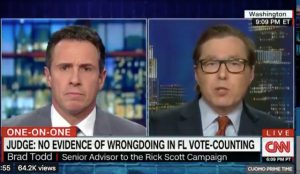 If you happen to listen to Chris Cuomo of CNN, then you probably don’t think there’s been a drop of voter fraud in the state of Florida in the last midterm election, despite the fact that Broward County Elections Supervisor Brenda Snipes has been shown to have violated election law.

This is one of many reasons why people don’t take the news coverage coming out of CNN seriously.

Speaking with Brad Todd, the senior adviser to Florida Gov. Rick Scott (R), who won the U.S. Senate seat last week over Democratic incumbent Bill Nelson, Cuomo said that “not a damn bit of proof” has been presented regarding voter fraud in the state of Florida.

“Before we put a halo on the Governor’s head, he came out with allegations of fraud, he didn’t have a damn bit of proof,” Cuomo told Todd. “He said that there was fraud, that [the governorship] was trying to be stolen from him, that there was cheating. You can’t prove anything. You have to have proof to say that there is fraud.”

“They went to the secretary of state, who’s a Republican, and he said, ‘I have no specific allegation for you to look at,'” said Cuomo. “So these are all Republicans, the Florida law enforcement says we have nothing to look at, they reconfirmed that this weekend. No halo for the governor on this.”

Brad Todd hit back by pointing out the very clear cases of voter fraud that Democrats in the state are actually trying to commit “out in the open.”

“Let’s talk about the fraud that the Democrats are trying to commit out in the open,” Todd said ” Right now, Mark Elias, who’s a lawyer for the Democratic side, he is asking the state of Florida to overturn the Florida procedures for verifying absentee ballots. Now that’s fraud in the open.”

Here’s a video clip of the exchange.

Sorry to burst Cuomo’s bubble, but the evidence to support the idea that voter fraud occurred is pretty darn thick. One would have to bury their head pretty deep in the sand to ignore this reality, which is precisely what Cuomo has done.

These folks in the media know full well how corrupt the Democratic Party is, yet that doesn’t stop them from trying to justify their actions and cover up the sleazy dirty tricks they attempt to pull.