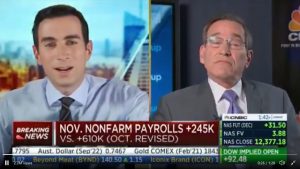 CNBC’s Squawk Box co-host Andrew Sorkin, who happens to be a big supporter of harsh restrictions on businesses and restaurants as measures of controlling the spread of the coronavirus, managed to get a rather heated response from CNBC’s Rick Santelli.

Santelli said, “I think our viewers are smart enough to make part of those decisions on their own. I don’t think I’m much smarter than all the viewers, like some people do.”

As CNBC reported, Santelli, who reports from the Chicago Mercantile Exchange and famously triggered the creation of the Tea Party in 2009, “suggested that U.S. policymakers should reconsider the balance between public-health restrictions, particularly on restaurants, with permitting more economic activity. He alluded to the recent controversies involving politicians such as Democratic Gov. Gavin Newsom of California, who caught heat for attending a birthday dinner for a friend at a posh restaurant in the San Francisco Bay Area.”

Santelli stated, “Therefore there is actually, and should be, an ongoing debate as to why a parking lot for a big box store, like by my house, is jam-packed. Not one parking spot open. Why are those people any safer than a restaurant with Plexiglas? I just don’t get it. And I think there’s a million of these questions that could be asked.”

“I think it’s really sad that when we look at the service sector and all the discussions we’ve had about job losses that that particular dynamic isn’t studied more, isn’t worked more, we don’t put more people in a room and try to figure out ways so that these service-sector employees and employers can all come back in a safer way,” he continued. “You can’t tell me that shutting down, which is the easiest answer, is necessarily the only answer.”

Sorkin kept trying to interject and claim that there was a huge difference between big box stores and churches and small businesses. But Santelli totally disagreed, saying “you can have your thoughts, I can have mine.”

Sorkin told Santelli he doesn’t have to believe the science, to which he replied that he didn’t and probably wouldn’t. Sorkin then accused him of doing a “disservice to the viewer because viewers need to understand it.”

Santelli flipped that back around on Sorkin. Sorkin then said that he’s just trying to keep folks healthy and that packing people into a Best Buy is different than packing them into a restaurant.

Then Santelli said, “I think our viewers are smart enough to make part of those decisions on their own. I don’t think I’m much smarter than all the viewers, like some people do.”

That was pretty spicy, right?