VIDEO: Check Out The Number One Downloaded Country Song Censored By Twitter 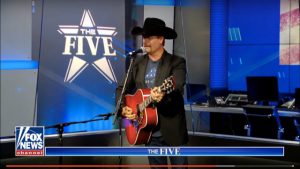 Censorship seems to be the name of the game for social media platforms these days, a point made abundantly clear by YouTube, which decided to demonetize all of conservative funny man Steven Crowder’s video content.

However, it seems it isn’t just videos and posts espousing right-leaning political rhetoric that gets the dander up on platforms like Facebook and Twitter. Turns out they don’t like certain kinds of country music either.

The social media company recently censored the song, “Shut Up About Politics,” deeming it “potentially harmful or associated with a violation of Twitter’s Terms of Service.”

Hey @twitter you’ve deemed the #1 most downloaded song in country music to be harmful and in violation of your terms? 100% of the proceeds go to ⁦@FoldsofHonor⁩ You need to fix this. FANS: Pls help me spread this message. ⁦@DanaPerino⁩ ⁦⁦@greggutfeld⁩ ⁦ pic.twitter.com/7Mf7hTCo9U

All proceeds from the song, written by country star John Rich, go the group Folds of Honor, which states on its website that its mission is “To provide educational scholarships to spouses and children of America’s fallen and disabled service-members.” Folds of Honor adds:

Our logo: In the folded flag we see the heavy price of freedom. Yet it’s also a symbol of hope, representing the enduring ideals that make this country a beacon of democracy. We chose this logo because it reflects our mission – to honor the sacrifice of America’s heroes, while giving hope to the bearers of their legacy. Folds of Honor has grown from a vision into a movement. This folded flag is a constant reminder of those who have paid the ultimate price for our freedom. It inspires us to help equip and educate their loved ones in need of our support. Thank you for embracing the call.

Appearing on Fox News’ “The Five,” Rich said to host Greg Gutfeld, “We had to chat about it be fun to come up with a song when you guys came to Nashville and you said, ‘I’ll send you some ideas. And so I get your email, and it was about , I think, about 37 or 38 paragraphs of classic Greg rant, and I went through it and I remember I called you ‘cause I didn’t want to offend you, and I’m like, (holding his hands inches apart) ‘You know, songs are generally only about this long.”

Here are the full lyrics to the song so you can get a better picture of how ridiculous this sort of censorship really is:

You punch left, I punch right

All this fussin’ and carryin’ on

It’s been going on a little too long

But I got something to fix us all up

Take a shot of my whiskey from a big red cup

So a message about folks just setting aside politics and their differences to join together and just live their lives as normal people is offensive now? Seriously?

Haven’t we all had enough of the hatred and bitterness that’s been rampant on both sides of the political spectrum? It’s hard to believe this sort of message triggers folks and makes them angry. Surely this is something we could all agree on, right?

Is the hooplah over this song a measure of just how divded our nation has become in recent years over the differences we have in political ideology? We are all human beings who have feelings, hopes, dreams, and aspirations. We all go through similar experiences and walk the path of life. Why can’t we just focus on what connects us and then respectfully discuss where we differ?