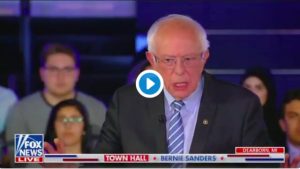 Democratic socialist Sen. Bernie Sanders participated in a town hall on Fox News where he was asked a question about the mental acuity of former Vice President Joe Biden, who has been garnering a lot of attention for his incoherent rambles and constant tripping over his own tongue.

Sanders didn’t seem too eager to jump in and give his thoughts on the subject, but nonetheless, he gave a rather diplomatic answer.

“Some of Joe Biden’s answers don’t make sense,” an audience member said to Sanders. “Do you think it’s acceptable for a presidential candidate to respond to questions like Joe Biden does?”

“When I give a speech, often, it’s 45 minutes or an hour, OK, because there are a lot of challenges that the country faces. And I have got to talk about them,” Sanders responded. “I think Joe was somewhere in — where was he? I don’t know, Michigan or someplace else the other day, and he spoke and he spoke for seven minutes. I don’t know how you say anything, other than minimal discussion in seven minutes.”

“The question of Joe Biden’s mental acuity is not something that just comes up anywhere,” Fox News anchor Bret Baier said. “Democrats have brought this up, including Senator Cory Booker, who endorsed Joe Biden today.”

Fox News played a clip of various left-wing media and Democrats slamming Biden for his constant stumbles on the campaign trail.

Sanders was then asked for his thoughts on the video clip, to which he stated that he would not attack Joe Biden personally, but once again brought up the length of the speeches he gives.

“If I’m going to give a speech to people — and that was at a rally or an event that he held — I can’t do it in seven minutes,” Sanders responded. “You know, there are too many issues. There is healthcare, education, climate change, immigration reform, criminal justice reform. I don’t know how you do that in seven minutes.”

Bernie Sanders was asked about Joe Biden's mental acuity. Sanders essentially says he's more substantive than Biden, balks at a direct comment about Biden's senility but says Biden can't seem to talk for more than 7 minutes while he does hour-long speeches. pic.twitter.com/6xC5BfOS3Q