VIDEO: Afghan Toddler Handed Up To American Soldiers Over Barbed Wire Fence At Airport In Kabul 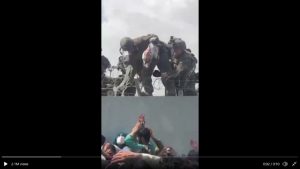 A video has now gone viral on Twitter that shows a toddler being passed over a wall with barbed wire fencing to American soldiers located at the airport in Kabul, the capital city of Afghanistan.

A website known as Disclose.tv first tweeted the video Thursday, with the caption, “Toddler pulled over wall by U.S. soldiers as desperate crowds gather outside [Kabul] airport.”

The account then followed up that post with another that explained the young child received medical treatment.

“UPDATE – The baby seen in the video was taken to a medical treatment facility at [Kabul] airport and cared for by medical professionals (CBS),” the second post read.

Meghan McCain, daughter of the late Sen. John McCain, then shared the video on her own Twitter, saying, “This is hell on earth.”

This is hell on earth. https://t.co/BhcdMXJQbP

McCain also tweeted a message on Friday directed at so-called women’s rights activists who protested the “‘oppressive’ Trump regime.” McCain said they are “awfully silent about the Afghan women right now…We see it. We clock it. Hypocrites.”

As The Daily Wire reported, further chaos has broken out at Kabul airport as the Taliban search for American allies.

“The Taliban is screening paperwork at checkpoints outside the Kabul airport, NBC News stated during a report put out on Friday, searching for Americal allies and others who worked for the coalition, and the situation outside has deteriorated into a ‘disaster,’ even as the United States persists in demanding that Americans find their own way to the airport for evacuation — and claims from the Pentagon that Americans are ‘not being impeded’ on their way out of the country,” The Daily Wire pointed out.

“Video posted to social media shows the ‘disaster’ outside Kabul airport — a crowd being tormented at a Taliban ‘checkpoint’ with soldiers whipping and beating those in line to leave, including a woman clinging to a baby,” the report noted.

The situation at Kabul airport is a disaster. pic.twitter.com/aZHkUqJZA6

This is a situation that was caused by President Joe Biden. The buck does indeed stop with him. What is necessary is for him to take responsibility for his actions and admit he made the wrong call.