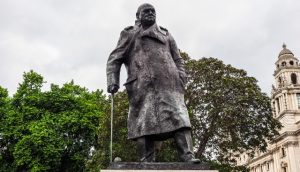 Folks, some of the idiocy rolling out of the radical left-wing these days is absolutely mind-blowing. I’m not telling you something you good folks don’t already know, but it’s becoming obvious the real pandemic we ought to be panicking about is the rampant spread of stupidity that has infiltrated every level of society.

Here’s a shining example of what I’m talking about.

A radical lefty activist, who is chair of the Lambeth “independent” police advisor board, named Lorraine Jones, actually revealed on air that she has no clue who Winston Churchill is, telling Cathy Newman, “I haven’t personally met him.”

Please. For the love of all that is good and right in this world, let this all be a really bad joke.

Newman started the exchange by asking Jones her thoughts on the “far-right protesters” protecting monuments, including one of Churchill, from activists attempting to destroy them.

“They were not guarding the Churchill statute,” Jones claimed in a fiery response. “The thuggery which we all witness was horrifying and totally unacceptable, so that was just an excuse…”

Last week, statues of Churchill and former President Abraham Lincoln were vandalized by “anti-fascist” and “antiracist” rioters in London.

Jones continues on, saying, “I think that what needs to happen, which I know has already started, we need to look at the people that are being placed on a high pedestal in this society, the reasons why they are, and honestly and rightfully [decide] if they are supposed to be removed.”

“And the sooner the government can make the decisions to take down the statues which shouldn’t be there, place them in a museum, like there are some people have requested, the better,” the activist said.

Newman then asked Jones if the statue should still be there.

Keep in mind, folks, that Churchill died back in 1965, which Newman never bothered to tell the ignorant Jones.

Newman asked what Jones thought of Churchill. Her answer is going to really hurt your brain, so brace yourself.

“Well, I’m going to be honest, I haven’t done a lot of history work with Churchill, but if I was to do that and it will be based on my findings,” Jones confessed.

WATCH AND CRINGE: How stupid is the liberal leader of an 'independent police advisory group' in London?

She was asked about removing the Churchill Statue… Her response… "I haven't personally met him." pic.twitter.com/j31OZ2YjFt

What does one even do with someone this ignorant and out of touch with reality? It doesn’t seem like there’s a whole lot of options to be had here, but one thing’s for sure.

This lady should not have a prominent position of authority in any capacity. Over anything.