Vice Shreds Ellen After Hanging Out With George W. Bush: “Rich People Only Care About Themselves” 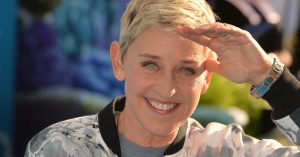 Now, let’s start right off by saying that Ellen DeGeneres isn’t really my cup of tea. That said, an enemy of the absurdly extremist leftists over at Vice is a friend of mine, and DeGeneres has certainly been declared an enemy by these loving, tolerant folks.

Over the weekend, the comedienne was photographed sitting with former President George W. Bush at a Dallas Cowboys game. Predictably, the squawking leftist minority utterly skewered DeGeneres for having the audacity to sit next to a political leper and arguably the second-most hated president of all time.

On Tuesday, however, DeGeneres demonstrated nothing but pure class when she touched on her friendship with Bush, as well as others who don’t share every single one of her beliefs, on her show:

After explaining the context that she and her partner were invited to the game by the daughter of the Cowboys owner, DeGeneres encouraged her audience to look beyond differences in belief and see people for who they are: people.

…But during the game, they showed a shot of George and me laughing together, so people were upset. They thought why is a gay Hollywood liberal sitting next to a conservative Republican president. A lot of people were mad, and they did what people do when they’re mad: they tweet.

For instance, I wish people wouldn’t wear fur. I don’t like it, but I’m friends with people who wear fur. But just because I don’t agree with someone on everything, doesn’t mean that I’m not going to be friends with them. When I say be kind to one another, I don’t mean only the people that think the same way that you do. I mean be kind to everyone.

While DeGeneres’ words get a hearty amen from me, and I’m not alone, hordes of her fellow liberals seemed to prefer to cling to bitterness and hatred.

After referring to President Bush as a “man whose résumé includes the invasion of Iraq and the botched federal response to Hurricane Katrina,” the op-ed claimed that DeGeneres’ “brand” of “celebrity whisperer who can befriend just about anyone” is “incompatible with reality.”

Something tells me those metrics aren’t equally applied to any other living presidents. Just a guess.

The backlash didn’t end there, of course. Vice kicked it up a notch with their usual Marxist flair, declaring that “Ellen and Science Confirm: Rich People Only Care About Themselves” and that DeGeneres’ and Bush’s friendship shouldn’t be a surprising one because “rich people love hanging out with other rich people,” and “often struggle with holding empathy” for others:

Still, it is confusing to think about how DeGeneres, one of the nation’s foremost openly gay celebrities would, could look past Bush’s years of using the bully pulpit to advocate against LGBTQ rights—not to mention, uhhhh, the unnecessary wars he started in Iraq and Afghanistan, which have killed millions of people and traumatized countless others.

Other celebs dropped in their two cents on the issue, but with mixed results.

Leftist actress Reese Witherspoon initially defended DeGeneres, tweeting, “Thank you for this important reminder, Ellen,” but that tweet got deleted pretty quick after People Magazine took Witherspoon out behind the woodshed over it.

Sorry, until George W. Bush is brought to justice for the crimes of the Iraq War, (including American-lead torture, Iraqi deaths & displacement, and the deep scars—emotional & otherwise—inflicted on our military that served his folly), we can’t even begin to talk about kindness. https://t.co/dpMwfck6su

To which Chad Prather epically responded:

Here’s Mark Ruffalo being friendly with a warmonger that bombed 7 countries, committed drone strikes on citizens, including a 16 y/o kid. In short, @MarkRuffalo is a hypocritical hack. pic.twitter.com/MxL0rcZfdO

While we honestly can’t act surprised at yet another instance of leftist cannibalism, we must remember that these people are not the majority. They are an incredibly vocal minority, but a minority still.

Ellen might not be my favorite, but her words ring true, and I have faith that the majority of Americans would agree with her.