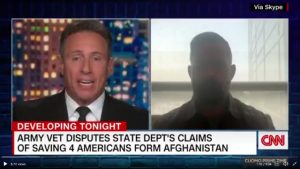 An American military veteran, who allegedly aided in the rescue of United States citizens trapped in Afghanistan has come out and stated that the Biden administration stopped private flights, which were being used to help with evacuation efforts, from being able to leave the country.

Chris Mills, the veteran in this story, made his remarks while conducting an interview with CNN host Chris Cuomo during his program on Tuesday evening, stating that the team he was working with had the ability to evacuate 25 Americans out of the country during “the very beginning days” of the chaotic troop pullout, revealing they had the clearance and the paperwork lined up to conduct the flight.

“That was thwarted by the State Department and then the DOD, where they essentially tried to deny our PPR, put us in pattern for almost 15 minutes, and then even said that if you land this aircraft, that we’re going to go ahead and take the aircraft certificate, we’re gonna we’re gonna ground the pilots,” Mills went on to say. “I mean, look, the bottom line is that would have been 25 Americans. So, this land border crossing wouldn’t have even been necessary if they could have let us land at that time.”

“On the second occasion, where we finally had to get those families out of Kabul and into a different location, they were manifested on another aircraft, that aircraft had been approved by the Taliban, had been approved by the DOD, it had been approved by the State Department, and right before the [last] hour when it was ready to fly, the State Department went ahead and canceled that flight or disapproved … that flight because they wanted to vet the manifest, which I can understand and appreciate,” the veteran continued. “But these are Americans who are basically being left behind. Now, again, one of the statements that you made, which I completely agree with, this isn’t a time to throw mud and be a political animal that says, okay, well, the Left did this or the Right did that.”

Mills said that he understood the administration’s alleged concern about vetting but noted that the individuals had been screened thoroughly and that he did not want that to be something that “prevents us from saving Americans and keeping them in harm’s way.”

Mills concluded by claiming that the Taliban was effectively preventing individuals from leaving the country who want to leave, including Americans.

“The Taliban are holding them, and there is no coordination as is being told, where if you show a blue passport, you can be let in,” Mills stated. “I can confirm, Chris, that’s just not true.”