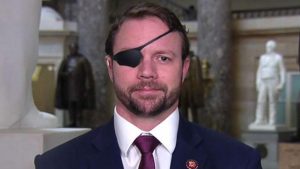 Rep. Dran Crenshaw (R-TX) is a breath of fresh air on the political scene.

The dude lost his eye in Afghanistan serving his country and was a Navy SEAL commander so staying calm and cool under the pressure of 2019 political rhetoric seems to be a breeze.

While the rest of Congress seems to take themselves entirely too seriously and get whipped up into a frenzy on a whim Crenshaw usually seems to be just sitting back and taking it all in with a smile.

Whether it’s destroying fellow-millennial-congressional-fresh-face AOC on Twitter, laughing his way from being on the receiving to the giving end of jokes on SNL, or standing up for life at the March for Life, he’s always cool, calm, collected and entirely straightforward.

He is definitely everything Congress, and the American people, need right now.

So when he was recently called a “Nazi” at an event for Turning Point USA, a conservative college activist group that can often be found embroiled in controversy on today’s far-left campuses, Crenshaw was pretty unphased.

He pretty much yawned.

At an event for Turning Point USA over the weekend, a young protester suggested Rep. Dan Crenshaw (R-TX) was a Nazi and told the former Navy SEAL that he should be “ashamed” of his military service. The congressman’s response to the young man was direct and memorable.

Crenshaw responded to the teen by saying: “If you have to call somebody a Nazi, it’s a good indicator that you haven’t thought through your argument very well.”

The teen stormed off after making his remarks and being booed by the crowd.

“That was fun, at least we had a little bit of…but get more creative with your insults, man,” Crenshaw added. “Like Nazi? C’mon.”

So much yes and more.

Seriously, how much longer are we just going to hurl around the term “Nazi” like its kryptonite for anyone you don’t like?

Are we really going to reduce Naziism to a meme now that few peple are alive anymore who truly understand the weight of this term?

TPUSA’s Benny Johnson also made a very good point when he tweeted out a video of the incident, saying: “Imagine volunteering to fight for the military that beat the Nazis. Becoming a Navy SEAL. Serving 10 years. Deploying to war 3 times. Giving your eye (& almost your life) for your country. Just to return home & get called a ‘Nazi.'”

That being said, Crenshaw has been pretty consistent that things like this don’t bother him so much as just make him shake his head, as evidenced in the video.

The freshman representative first gained national attention when he was mocked for his eye patch on SNL, which he wears having lost his eye in service to his country. This, naturally, upset many. But not Crenshaw.

Good rule in life: I try hard not to offend; I try harder not to be offended. That being said, I hope @nbcsnl recognizes that vets don’t deserve to see their wounds used as punchlines for bad jokes.

Trying hard not to be offended is a very good thing to try hard at. And more people need to follow Crenshaw’s lead and chill out.

And in the meantime, maybe come up with better insults for ideological opponents.

Because really. Come on.