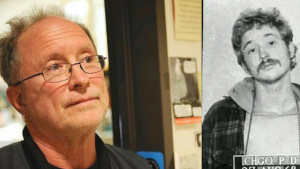 People on the left have a favorite euphemism for “terrorist”=”activist,”  and that’s exactly how Obama and his buddies have always referred to Weather Underground terrorist Bill Ayers, with whom they are quite chummy.

Ayers was one of the founders of the Weather Underground, a radical anti-war terrorist cell that helped plant bombs in a New York Police Station, the Pentagon, and the US Capitol during the Vietnam war.

He was recently challenged on Twitter by a man claiming to be an infantry officer when Ayers was bold enough to claim he “loved’ the soldiers that he and the anti-American Vietnam War protesters scorned in the sixties.

It began when a Twitter user busted Ayers out for being able to dodge the draft due to his parent’s wealth. This is ironic, of course, because Ayers and his “activist” buddies essentially blame capitalism and rich people for everything bad. Except, presumably, the wealth of their parents.

“Bill Ayers came from a wealthy family that got him out of the draft. He was cool with attacking the poor kids that got drafted though,” the user wrote, to which Ayer’s replied: “Nope. Love the grunts, hate the war and the politicians and their capitalist overlords willing to salutes them for their own wealth and power.”

So was it a bit of “tough love” when you literally tried to kill “grunts” with one of your bombs, Bill? Ayers’ Discover the Networks profile reveals a foiled plot in New Jersey had originally been designed to do just that, by Ayers’ own account:

“That bomb had been intended for detonation at a dance that was to be attended by army soldiers at Fort Dix, New Jersey. Hundreds of lives could have been lost had the plan been successfully executed. Ayers attested that the bomb would have done serious damage, “tearing through windows and walls and, yes, people too.”

As it turns out, this Twitter user had been a “grunt” himself, and challenged Ayers, evoking a ludicrous reply from the “activist”:

I served honorably in the struggle against war, for peace and justice https://t.co/lLumozc9t1

“I served honorably in the struggle against war, for peace and justice,” Ayers replied.

Oh yea, blowing up innocent people totally fights war and brings about peace and justice. The most ironic thing here is, of course, that Bill Ayers has clearly escaped justice for his particular brand of “activism”!