On Thanksgiving, an Oklahoma police officer was shocked and insulted when he received his Starbucks order to find the word “PIG” printed on the cup where his name should have been.

At the time, Kiefer Police Chief Johnny O’Mara shared a photo of the cup in a now-deleted Facebook post: 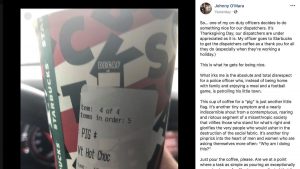 “One of my on-duty officers decides to do something nice for our dispatchers,” O’Mara said, adding that the officer was hoping to treat the dispatchers who were stuck working one of the world’s hardest jobs on Thanksgiving. “This is what he gets for being nice.”

“What irks me is the absolute and total disrespect for a police officer who, instead of being home with family and enjoying a meal and a football game, is patrolling his little town,” O’Mara continued, calling the incident “another tiny symptom and a nearly indiscernible shout from a contemptuous, roaring and riotous segment of a misanthropic society that vilifies those who stand for what’s right and glorifies the very people who would usher in the destruction of the social fabric.”

The official Starbucks Facebook account commented on the post to apologize for the insult, and Starbucks corporate also issued a statement, saying that the “partner” who mislabeled the cup “used poor judgement and is no longer a partner after this violation of company policy.”

For their part, Starbucks is reportedly “working very well with me and my department,” O’Mara said in a Fox News interview “and we’re hoping we can take this moment, where a mistake was made, and turn it into something that highlights the ability to be civil to one another.”

The New York Times says Starbucks and the Kiefer Police Department plan to host a “Coffee With a Cop” event, “in which local law enforcement can meet with baristas to discuss the role that dispatchers and officers play in keeping communities safe, according to a joint statement issued on Friday.”

Starbucks also plans to work with law enforcement agencies to “educate its employees nationwide and promote understanding and respect.”

Considering that this is the billionth time Starbucks employees have disrespected first responders, don’t expect much to come of this latest round of “sensitivity training.”

Upon hearing of the debacle, Black Rifle Coffee, a company that actually gives a damn about the men and women who protect and serve them, reached out to the Kiefer Police Department to show some smooth, caffeinated love.

Evan Hafer, Black Rifle’s CEO, told The Daily Wire he honestly doubts that “the majority of Starbucks employees would think that what the person did was acceptable,” but he’s not ignorant of Starbucks’ values and sees it as the result of a “company culture issue.”

“I think that Starbucks has kind of been the example of more of the progressive aspects of culture, and this is just the way that it’s exemplified now,” Hafer, a military veteran, said. “When your CEOs and founders are more progressive, and they’re pushing the company in a direction that’s somewhat anti-American, there’s going to be this friction.”

Starbucks can apologize and fire the employees who are at fault time and time again, but until it addresses its top-down culture of leftism and progressive intolerance, our first responders will have to wonder whether a quick cup of coffee is going to turn into a major media event.

“The outward face of a lot of companies in today’s corporate environment is more about placating the progressive, politically correct, AOC/tech generation versus taking a stand for being not only pro-law enforcement but pro-America,” Hafer added, noting that the problem runs a lot deeper than just one uppity coffee chain.

Please excuse me while I go throw all my money at Black Rifle Coffee.