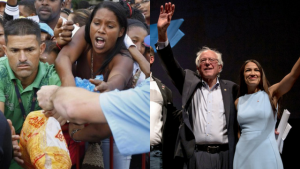 If it weren’t for all the awful suffering and misery down in Venezuela, I’d be thrilled to have a real-life example to point to whenever someone asks me why I’m so adamantly opposed to socialism.

Sadly, we’ve had to watch this real-life example take the downward spiral that every socialist government inevitably takes right before our eyes, but many in the US seem to be blissfully ignorant to what a cautionary tale it should be.

Venezuela is one of the most resource-rich nations in the world and could easily be the most prosperous nation in Latin America. But they just had to go and let a Marxist lead them.

Now, the people don’t even have dogs to hunt in the street anymore because they’ve already killed them all for food.

So you think it would have been an incredibly sobering moment for the entire global community when President Nicolas Maduro admitted that their policies had failed, and even personally accounted for it.

“The production models we’ve tried so far have failed, and the responsibility is ours—mine and yours,” he told the PSUV party congress, according to Forbes.

Meanwhile, Town Hall contributor John Dempsey writes, “The left has no problem with the apparent wrecking ball effects of universal this and universal that.”

“Bernie Sanders and Alexandria Ocasio-Cortez are trekking all over the United States touting that it is a good system, pretending to be compassionate, moral people when the left-wing system of power is immoral itself.”

He explains that while Sanders and Ocasio-Cortez often point to “democratic socialist” systems like those found in Northern Europe, you aren’t talking about socialism in a vacuum, you’re talking about nations that have the security of the EU to lean on.

Venezuela is socialism in a vacuum, and if socialism were to be implemented in the US, it would also be a vacuum, as we also do not have a strong organization like the EU to prop us up.

Instead, socialism runs contrary to the very nature of liberty, the liberty our nation was founded on:

Those attempting to implement the fringe left political system into American politics effectively are trying to dismantle our Founding Fathers design of a nation with a limited government. Socialism gives government power, so when Bernie starts yelling with spittle spraying on his audience, he is lying. Socialism isn’t meant to benefit people. It is designed to help elected officials.

Maduro surprisingly did the right thing by admitting the system failed. Bernie should be intellectually honest and accept what he has been running on is a failed idea; however, he won’t.

No matter how badly socialist ideas fail, the left will always pursue them because they are in constant desire of more power. Control equals power. Universal health care, income, groceries, or whatever are the conduits to which leftists gain control into individuals’ lives, bringing power over them.

Leftists roam the earth seeking to destroy anything that stands for goodness, honor, freedom, and liberty.

It’s time for the left to admit socialism is garbage.

The question, however, remains…will they?