Venezuela 2020: Socialism Is A Great Way To Destroy Your Country 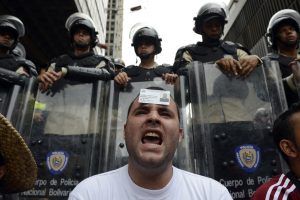 What’s playing out in Venezuela (and has been for decades now) is a stark, unabashedly vivid picture of what socialism really does to a country. Americans, especially our precious social justice-demanding population, need to take a hard look at what really happened in South America’s once-wealthiest nation.

Over the weekend, angry masses of Venezuelans hit the streets to protest prolonged electricity blackouts and, subsequently, clean water. The citizens demanded their president, Nicolas Maduro, step down from his post after “wrecking the economy.”

Or, if you ask Maduro, it’s due to cyberterrorism plots from those wicked American capitalists. Which, honestly, would still be a pretty good argument against him because American capitalism still (in this made-up scenario) gave us the wealth, technology, and opportunity to even use computers to hack anyone’s grid.

While Maduro’s defense is hilariously pitiful, the bind the people of Venezuela find themselves in is no joking matter.

After such protracted neglect of the grid, it’s extremely dangerous to repair, if not impossible, as several brave engineers are finding out firsthand. According to WIRED, the aging grid would have to be “jump-started,” but the rickety old thing might not be able to withstand such a massive power surge.

So, what’s Maduro to do when the system that separates his people from the dark ages needs massive repairs? Impose mandatory rolling blackouts, of course.

Citizens of the capital city of Caracas, in particular, are now only able to use power in short bursts for the next 30 days. What could go wrong? Well, for the same reason I don’t allow my kindergartener to flick the light switches in our 250-year-old house for his personal strobe light, using repeated bursts of high power ain’t gonna be too kind to that already failing grid.

Now, for some of you socialist neo-hippie types out there, living without electricity might not seem like such a huge deal. As long as you can grow kale and soybeans and live in a yurt, everything’s all good.

Except, of course, the blackouts are causing an even bigger, more immediate problem: a shortage of clean water.

You see, cupcakes, the pumps that bring clean water to Caracas and its surrounding neighborhoods rely on electricity, and a heck of a lot of it. The quick bursts of power under the blackouts are not enough to get those pumps running at full speed. This means that the citizens—the men, women, children, livestock, puppies, and kittens—of these parts of the nation are now living without clean water and are forced to gather water from streams, puddles, or the Guaire River, one of the continent’s most polluted bodies of water. If you’re looking for a recipe for dysentery, all you Bern-feelers, there you go.

The capital is beginning to tumble like a Jenga tower as the crisis has forced the government to cancel school and many businesses to shutter until the problem is resolved.

And, let me tell you, the people of Venezuela are done with this mess.

Unfortunately, many of these folks seem to want to switch out their socialist dictator, Maduro, for another socialist who pinky-swears he won’t become a dictator. “We have to get rid of this usurper, and we can’t think about anything else,” one protester told a Reuters reporter.

The leader of the anti-Maduro opposition, Juan Guaido, challenges Maduro’s claim to the presidency and is encouraging the angry masses to refer to Maduro as “the usurper.”

“We haven’t just come to demand water and power. We’ve come to demand freedom and democracy,” Guaido at the weekend rally. “We can’t let ourselves become used to this, we can’t put up with it, we aren’t going to let these crooks keep hold of our country.”

Guaido, however, is a member of Venezuela’s “Popular Will” party, who describes itself as a “progressive social-democratic party” affiliated with Socialist International. I know the saying is, “you’ve got to fight fire with fire,” but has anyone actually tried that? Ask a firefighter. It doesn’t work, y’all. We fight fire with water, and Venezuela is running out—politically and literally.

While the mainstream media is hesitant to pin any blame on socialism—that is, on the incredibly rare instance they actually cover the crisis in Venezuela—we know the truth. Socialism is a cancer of the body of any thriving nation. We are living in a time where some of the boldest, most outspoken socialists are running for our highest elected office, and they’ll take it if we let them.