“Veggie Tales” Accused of Perpetuating White Supremacy. Yup, This Is Where We’re At. 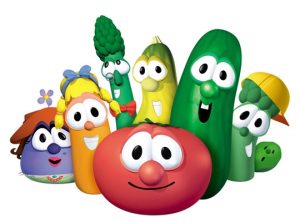 This has to be a big joke. I know most conspiracy theories suggest nefarious cabals controlling global currency and plotting false flag school shootings or whatever, but has anyone explored the idea that maybe the global elite is just screwing with us?

Like, seeing how far they can take political correctness and then just cracking up in a dark, smoky room somewhere as we tear our hair out over how stupid it really is?

It’s getting really hard to believe any of this is real.

Because now “Veggie Tales” has been accused of racism.

You know, the show in which vegetables act out Bible stories?

The Christian cartoon “VeggieTales” is racist because the villains are vegetables of color. The NFL is racist since most players are black and most coaches and owners are white. White women advance white supremacy when they support President Donald Trump.

These are some of the arguments made by students at a “Whiteness Forum” held at Cal State San Marcos on Thursday that aimed to take a “critical look at whiteness,” according to organizers.

[One] project suggested that the children’s Christian television show, “VeggieTales,” perpetuates racial stereotypes. A female student who worked on the project said in an interview that the accents of the evil characters tend to sound ethnic, such as Latino, while the good characters sound white.

“When kids see the good white character triumph over the bad person of color character they are taught that white is right and minorities are the source of evil,” the project stated.

The main characters are green and red.

If we are at a point in our culture where we’re discussing the racial undertones of cartoons starring VEGETABLES, for crying out loud, clearly we live in a privileged nation.

Around the world, people are being killed for the color of their skin or their Christian faith. Women are still treated–legally–like second-class citizens in multiple Muslim-majority nations. Venezuelans are so starving, they’re running out of stray dogs to eat.

And yet, these puffed-up, peak privileged college students are worried because cartoon vegetables have foreign-sounding accents.