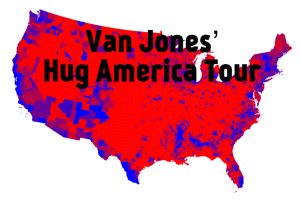 Do you not find this a tad offensive? You should, because it is!

100 Percent Fed Up says CNN political commentator Van Jones visited ABC’s “The View,” where he criticized fellow liberals for being “mad at every single person” who voted for President Donald Trump. Jones tells the women that the Democrats need to make their tent bigger to include “folks in Appalachia”…Really? He goes on to say that they’ve been embracing Muslims and other minorities but need to include the “miner with black lung”…Huh??? Basically, he’s saying the Democrats are willing to toss their remaining policies to wh*re themselves out for votes…any votes they can get from any warm body they can drag to the polls.

“Right now I don’t see Democrats looking at the situation and saying, you know what, maybe we drew our circle too small,” Jones said. “I love that we’re hugging LGBT and Muslims and all the people who usually don’t get a hug. We’re hugging them, but maybe we need a bigger hug, and include some of those folks in Appalachia.”

Really Van? Are you going to personally go into Appalachia and start hugging people? I wish you would. You’d probably find a lot of folks that are a lot smarter than you think! You’d find Americans that are tired of the race-bating rhetoric and judgmental attitude of elitists like yourself.  You’d also find that you can’t buy off their vote with a hug.

“They are trying to do that,” co-host Joy Behar agreed. (Insert eye roll!)

“Listen, there may be some leaders who are. Unfortunately, and I have to be honest—I get in trouble because I’m honest,” Jones said.

“I know you do,” Hostin interjected.

“When I listen to liberals, when they’re not on TV trying to make it sound good, we’re still in grief; we’re still mad,” Jones said. “And we’re not just mad at Trump, who we should be mad at. We’re mad at every single person who voted for Trump, even people who have no jobs, even coal miners who have black lung disease and who are dying and Democrats don’t have anything to say about it for years.”

“In my conversations with liberals, it’s like ‘they,’ ‘those’ Trump voters, ‘them.’ ‘I don’t understand how those people could ever do that.’ In America, we don’t have to agree. We have to try to understand,” he said.

Well, Van, Appalachia stretches from Georgia to Maine, so that’s a whole lot of hugs. But we know who you’re referring to don’t we? Wink. Very understanding of you Mr. Jones.

From the looks of this map, you’ve got a lot of hugging to do. 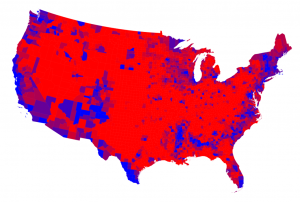