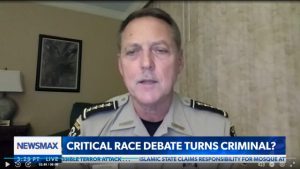 Loudoun County, Virginia Sheriff Michael Chapman has come out and denied that he colluded with school board officials in order to keep a man whose daughter was sexually assaulted at school from speaking at the June meeting of the board.

Making an appearance on Newsmax’s “Spicer & Co.” program, Chapman offered up his sympathies for Scott Smith, who after discovering his daughter had been sexually assaulted back on May 28 in a girls’ restroom by an individual claimed to be a “boy in a dress,” popped up at the June 22 meeting to voice his opposition to the school board’s proposed transgender policy.

Things then got tense after Loudoun County Public School Superintendent Scott Ziegler went on to deny there had ever been any assaults in the restrooms reported.

The altercation gained national attention through video that spread on the internet, after which Smith was branded a right-wing extremist by some and cited by the National School Boards Association as an example of ”domestic terrorism.”

The accusation came in a letter asking the Department of Justice to unleash the FBI and its counterterrorism division on a flurry school board protesters.

Chapman, however, went on to say that his deputy, who arrested Smith, was totally unaware of the investigation that was still happening concerning the sexual assault of his daughter, which had kicked off three weeks prior.

”It wasn’t … had nothing to do with what happened to his daughter, and I feel for him,” Chapman went on to say. ”I can’t imagine — two daughters and six granddaughters — I can’t imagine what he and his family are going through.”

Still, Chapman denied there was any advance discussion with the school board regarding Smith’s appearance.

”A lot to this investigation regarding his daughter, and we didn’t charge anybody until July 8, so the notion that there was, somehow we were in some cahoots with the school board, with the commonwealth attorney, with anybody to arrest him to keep him from speaking at that meeting is ridiculous,” Chapman continued.