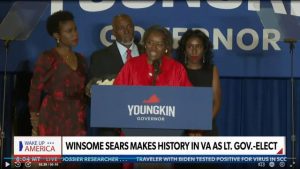 Winsome Sears, the first Black woman to be elected to the office of lieutenant governor, recently spoke with Newsmax, saying she didn’t decide to get into politics and run for office as a means of making history, even though she did indeed make history, but in order to help children get back to learning.

“I didn’t look at the historical line and say, well, if I win, I will be the first this or the first that,” the Republican and former member of the U.S. Marine Corps, said during a chat on Newsmax’s “Wake Up America.” “I just thought, our children aren’t learning … I am the most likely one who can bring us across the finish line so that we can help the children to learn, and that’s why I ran.”

Sears, who was born in Jamaica, also ran on a platform backing the Second Amendment, and told Newsmax that she believes she won because “voters just want you to be real.”

“They don’t want to hear big words spouting nonsense,” said the lieutenant governor-elect. “[They say] just talk to us like we’re people. because the issues are real. The problems are real.”

She also said she wants to stress that Americans aren’t alone on this planet, as there is still China and Russia to deal with, and she slammed President Joe Biden for the steps he’s taken while in office.

“We can destroy ourselves from within while the other nations are moving around and laughing,” Sears commented. “We’ve still got Americans in Afghanistan. We’ve still got translators who have helped us. When is Mr. President going to go and get our people out? Marines have died. A soldier and a sailor died because of his ineptitude. When is he going to lead? So that’s what I’m talking about. We can’t be afraid of speaking, as they say on the other side, truth to power. That’s what we’re about.”

She also spoke out about how she’s been treated as a candidate for lieutenant governor.

“I don’t care what political persuasion you are,” she concluded. “I would have died for you to protect America. Democrats handing out literature at the polls and I went to shake their hands and they refused to do so, … and I said to them, ‘I was in the Marine Corps and I would have died for your right to be here now and yet you can’t shake my hands.'”

This woman is a liberal’s worst nightmare. Can’t wait to see what she does once she starts this new position.