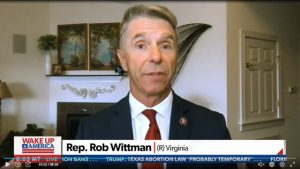 Virginia Congressman Rob Wittman made an appearance on Newsmax where he stated that the huge victory of Republican Glenn Wittman over Democratic challenger Terry McAuliffe for the governor’s seat in the state is proof that the same conditions exist today that existed in years past that led to the GOP taking control of the House.

“If you look back to 2009, when Bob McDonnell won the [Virginia] governor’s race, and then in 2010 the record numbers of seats that Republicans captured, I think you see the same sort of conditions building now,” the Virginia Republican went on to state during his chat on Newsmax’s “Wake Up America.”

He also agreed that another pattern is emerging, like when former House Speaker Newt Gingrich led the “red wave” of Republicans retaking the House, for the first time in 40 years, in 1994, after Republicans won the governors’ races in Virginia and New Jersey.

But to keep up the momentum, Republicans must make sure that voters see their party is doing better than Democrats on issues that are important to them, like immigration, inflation, and national security, said Wittman.

“We should be able to build on those things and make sure we create the vision and that is the counter to what the Democrats are doing in the House and Senate,” said the congressman. “As we see those things happening before us now, especially with what’s happening with this reconciliation, building this massive amount of spending, people are concerned about that. I think it’s a great opportunity for us to build on the victory here in Virginia, and then use that going forward.”

Wittman stated that there were several reasons that Youngkin was able to defeat McAuliffe, who was himself a former governor of Virginia. One of those reasons was Youngkin’s ability to “capture people’s frustration” concerning what is happening in the state’s schools, coupled with Virginia’s sinking economy, and with Democrats lack of support for law enforcement.

“He was also able to create a vision in people’s minds about what the path forward would be,” said the Virginia Republican. “He’s very personable, too. You know, I think you people look at a governor just like their next door neighbor, and that is do they trust them? Do they feel comfortable? Do they feel connected? And Glenn did all of those things very effectively on the policies but he is also very personable and someone Virginians could trust.”