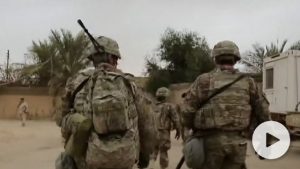 A top U.S. commander in the Middle East made the announcement on Wednesday that 2,200 troops would be leaving Iraq at the end of the month.

Marine Gen. Frank McKenzie made the announcement with the Iraqi Minister of Defense, sending the message that this troop withdrawal was a decision that was made with consultation from the Iraqi government.

“The United States has decided to reduce our troop presence in Iraq from about 5,200 to 3,000 troops during the month of September,” McKenzie said.

“This reduced footprint allows us to continue advising and assisting our Iraqi partners in rooting out the final remnants of ISIS in Iraq and ensuring its enduring defeat,” he added.

The withdrawal announcement Wednesday was a coordinated effort between the Pentagon and President Trump, who has pledged to exit “endless wars.” Trump has hit Democratic opponent Joe Biden for his vote in favor of the Iraq War in 2002 as a member of the U.S. Senate and has campaigned on getting the U.S. military out of the Middle East.

A senior defense official spoke with Fox News, stating that as of right now, there would be no change concerning the 600 troops that are stationed in Syrai.

McKenzie went on to state that the “ultimate goal” is for the Iraqi government to be well equipped to stop an ISIS uprising on their own without assistance from outside forces.