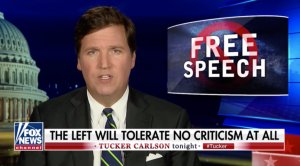 On Wednesday evening, Fox News host Tucker Carlson told viewers of his program that his staff had received rather “damning” documents concerning the Biden Family, but stated they “vanished” when someone tried to ship them from California to New York.

“After an extensive search, we have found the contents of the package and are arranging for its return,” a spokesman for UPS said. “UPS will always focus first on our customers, and will never stop working to solve issues and make things right.”

The spokesman previously said that UPS was “conducting an urgent investigation into this matter and regrets that the package was damaged.”

On Wednesday, Carlson said a producer in New York attempted to ship the documents overnight to Los Angeles, but the parcel never arrived. On Tuesday, he said he was notified the envelope had been opened and its contents “disappeared.”

The Fox News host said the shipping company was able to track the package from the time the producer shipped it until 3:44 a.m. Tuesday, when “an employee at a sorting facility in another state noticed that our package was opened and empty.”

“As of tonight, the company has no idea or no working theory, even, about what happened to this trove of material,” Carlson stated, pointing out  that UPS conducted interviews with all the folks who had come in contact with the package and were not able to figure out how they went missing.

Well, the good news here is that the contents have been found. What kind of information does this contain that is so “damning?” Hopefully, we’ll find out very, very soon. It could potentially have a big impact on the presidential election next week.