UPDATE: The Truth Behind Chris Pratt’s Not-Racist Flag Shirt Will Make You Want One 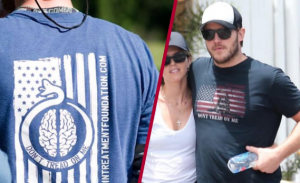 As we reported yesterday, Chris Pratt was blasted earlier in the week after paparazzi photos showed the Guardians Of The Galaxy and Parks and Recreation star wearing a patriotic-themed shirt that had been branded by a gaggle of nutjobs as a “white supremacist” dog whistle.

In case you missed it, the offending shirt was printed with this spin on the Gadsden Flag, an American Revolution-era flag illustrating our forefathers’ defiance against tyrannical British rule:

As explained in yesterday’s report, the Gadsden flag has literally no official, historical ties to any racist organizations whatsoever. While the flag is more famously associated in our time with the U.S. Men’s Soccer Team, certain libertarian groups, the Tea Party (which bent-left news orgs consider “far-right,” of course), and Metallica, squawking leftists prefer to link the image of the snake with assorted white supremacist dirtbags who they claim have appropriated the symbol of the snake and the verbiage “Don’t Tread on Me” for their own nefarious purposes.

Therefore, Chris Pratt is a white supremacist. If your eyes just rolled so far back in your head you think they might get stuck, you’re not alone.

But, as The Daily Wire reported on Wednesday, a new development in the Case of the Racist T-Shirt makes the attack on Pratt even worse. Apparently, the t-shirt came from The Brain Treatment Foundation, a pro-veteran nonprofit that Pratt has proudly supported in the past.

According to their website, BTF “is a 501(C)(3) nonprofit organization dedicated to providing support for brain health initiatives relating to treatment, rehabilitation, research and public education. The organization seeks to transform the lives of individuals suffering from the effects of a Traumatic Brain Injury or Concussion, children with mild to severe cognitive or neurological disorders, the elderly population dealing with physical and cognitive function decline and members of the military diagnosed with Post-Traumatic Stress or a Traumatic Brain Injury.”

“The goal of Brain Treatment Foundation is to partner with treatment providers and other organizations to restore hope and provide support for people suffering from brain related health issues and their families,” the site reads. “Through treatment, rehabilitation, research, and public education, Brain Treatment Foundation seeks to become an active agent of change in the world of brain health.”

On Facebook, Brain Treatment Foundation (BTF) posted a photo of Pratt in the T-shirt and said that they were “honored” by the support.

We are honored to work with the silent warriors who sacrifice greatly so that others may live free, who defend our freedom, who live with honor and by the word of God. These warriors hunt evil to protect our peace, while those who disparage their sacrifices and our nation from behind a computer screen, pretend it doesn’t exist. We are proud of the American flag and all symbols that represent the freedom brave men and women have shed blood for since the inception of our great country.

The Federalist’s Inez Stepman was among the first to do a little digging and connect Pratt’s shirt with BTF:

How black does your soul have to be to see a shirt on a celeb & hate-swarm a veterans’ brain injury charity because their T has a patriotic flag?

Yeah, that Gadsen flag tee Chris Pratt was wearing is for an awesome nonprofit. Support their good work here: https://t.co/YJMj8UZZ29

“It’s a shame that this situation occurred and a lot of misinformation was spread by people we don’t know, but it’s an opportunity for people to learn about veterans mental health and ways we can support those who fight for this country when they come home from war,” Fisher said in a statement to The Daily Wire. “We don’t advertise because we prefer to stay behind the scenes. But we have some of the T-shirt’s and hats that Chris has worn in Instagram pictures since 2016,” Fisher said, noting that BTF might consider selling the shirts and hats popularized by Pratt “to raise money for veterans.”