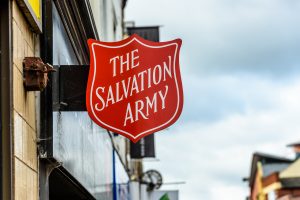 Yesterday, the world was flipped on its ear when our beloved Chick-fil-A announced that it was cutting its charitable ties with supposed “anti-LGBT” groups The Salvation Army and the Fellowship of Christian Athletes.

The backlash was sure and swift, with countless people on both the right and left ends of the sociopolitical spectrum denouncing the popular chicken joint’s move. What conservatives and Christians saw as a shocking capitulation to the totalitarian leftist agenda, leftists and assorted pro-LGBT folks saw as too little, too late, leaving Chick-fil-A a restaurant without a country.

Chick-fil-A: CAN WE GET SOME OF THAT ACTION?!

“If Chick-Fil-A is serious about their pledge to stop holding hands with divisive anti-LGBTQ activists, then further transparency is needed regarding their deep ties to organizations like Focus on the Family, which exist purely to harm LGBTQ people and families" @AndersonDrew https://t.co/0OXfScv1z6

In a statement later on Monday, The Salvation Army responded to the announcement with, among other things, a reminder that it is the largest social services provider in the world and that it lovingly serves millions of LGBT people in need.

“We’re saddened to learn that a corporate partner has felt it necessary to divert funding to other hunger, education and homelessness organizations — areas in which The Salvation Army, as the largest social services provider in the world, is already fully committed,” the organization known for ringing in the holiday season with its red kettles said in a statement. “We serve more than 23 million individuals a year, including those in the LGBTQ+ community. In fact, we believe we are the largest provider of poverty relief to the LGBTQ+ population.”

“When misinformation is perpetuated without fact, our ability to serve those in need, regardless of sexual orientation, gender identity, religion or any other factor, is at risk,” the statement continued. “We urge the public to seek the truth before rushing to ill-informed judgment and greatly appreciate those partners and donors who ensure that anyone who needs our help feels safe and comfortable to come through our doors.”

We love all. We serve all.
Read The #SalvationArmy's full statement in the image and here: https://t.co/F079r7lbMX pic.twitter.com/0jJv0Ed2zP

In a new statement to The Christian Post, however, Chick-fil-A seemingly backpedaled like hell from the idea that their move was somehow a capitulation to the LGBT mob:

Beginning in 2020 the Chick-fil-A Foundation will introduce a more focused giving approach, donating to a smaller number of organizations working exclusively in the areas of hunger, homelessness and education. We have also proactively disclosed our 2018 tax filing and a preview of 2019 gifts to date on chick-fil-afoundation.org. The intent of charitable giving from the Chick-fil-A Foundation is to nourish the potential in every child.

Our goal is to donate to the most effective organizations in the areas of education, homelessness and hunger. No organization will be excluded from future consideration – faith-based or non-faith based. I also wanted to add that Chick-fil-A will not be opening on Sundays.

So, in order to donate to the most effective organizations in those areas, they’re cutting ties with the Salvation Army, but it has nothing to do with the left’s hatred of these two entities?