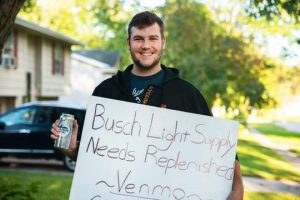 As previously reported, the story of Carson King, forever immortalized as the beer money sign guy who is raising a boatload of money to give to an Iowa children’s hospital, was all but completely overshadowed by the wholly unnecessary and irrelevant revelation that King shared a racially insensitive tosh.0 joke on Twitter when he was a sophomore in high school.

We also reported, rather giddily, I admit, that the footnote of King’s juvenile past was swiftly followed by another revelation that Aaron Calvin, the Des Moines Register reporter who dug up King’s old tweets as part of a “background check,” apparently posted a slew of his own racist, cop-hating, homophobic tweets at around the same age King posted his.

After the fine, fine People of Twitter™ brought Calvin’s own regrettable social media history to their attention, the Register noted that he was being investigated. On Thursday, it turns out, Calvin was fired from the news outlet.

“We’ve listened with an open mind to everyone, but especially Iowans, the people who are our neighbors, who care as much as we do about our state and everyone who lives here,” wrote Register editor Carol Hunter in a statement Thursday night. “And we hear you: You’re angry, you’re disappointed and you want us to understand that.”

“I want to be as transparent as possible about what we did and why, answer the questions you’ve raised and tell you what we’ve learned so far and what we’ll try to do better,” Hunter added. “For one, we’re revising our policies and practices, including those that did not uncover our own reporter’s past inappropriate social media postings. That reporter is no longer with the Register.”

As for just why in sam hill Calvin was poking around King’s years-old tweets, Hunter explained:

Some of you wonder why journalists think it’s necessary to look into someone’s past. It’s essential because readers depend on us to tell a complete story.

In this case, our initial stories drew so much interest that we decided to write a profile of King, to help readers understand the young man behind the handmade sign and the outpouring of donations to the children’s hospital. The Register had no intention to disparage or otherwise cast a negative light on King.

In doing backgrounding for such a story, reporters talk to family, friends, colleagues or professors. We check court and arrest records as well as other pertinent public records, including social media activity. The process helps us to understand the whole person.

There have been numerous cases nationally of fundraising for a person experiencing a tragedy that was revealed as a scam after media investigated the backgrounds of the organizer or purported victim.

As journalists, we have the obligation to look into matters completely, to aid the public in understanding the people we write about and in some cases to whom money is donated.

Let me stop you right there, Carol.

How in the world does it aid the public in understanding King to know that he posted a couple of tweets, the content of which we are not allowed to judge for ourselves since no one will publish exactly which of tosh.0’s many politically incorrect jokes they were, when he was a sophomore in high school?!

If you’d uncovered that he had committed some skullduggery relevant to the story of his fundraiser, that’d be more than fair. Does he have a history of bilking the public under the guise of charity? Does he pose a credible threat to anyone?

No, obviously not. This is simply a case of political correctness gone much, much too far.

Further on in the statement, Hunter gave a tight-lipped explanation of the decision to fire Calvin in light of his own tweets:

Now I’ll turn to the investigation into our reporter’s social media use: Until readers called to our attention some inappropriate posts from several years ago, the Register was unaware of them.

Employees of the Register are vetted through typical employment screening methods, which can include a review of past social media activity, but the screening processes did not surface those tweets. Register employees additionally must review and agree to a company-wide social media policy that includes a statement that employees “do not post comments that include discriminatory remarks, harassment, threats of violence or similar content.” We also have policies that speak to our company values.

We took appropriate action because there is nothing more important in journalism than having readers’ trust.

Now, it could be fair to say that the screening process didn’t “surface” some of Calvin’s tweets because most of them were made nearly a decade ago. If you ask me, it would be as inappropriate for the Register to fire Calvin over old, juvenile tweets as it was for Calvin to dig up King’s tweets.

The key difference, however, is that several of Calvin’s most hateful tweets were only a few years old. Maybe the Register should hire some of the People of Twitter™ to vet its employees.

While I’m as happy as the next person to enjoy the poetic justice of this story, let’s not lose sight of the bigger issue. “Cancel culture” needs to stop. Plain and simple.

This idea that society needs to wield its fiery sword of justice over everyone who has ever so much as laughed at a politically incorrect joke (or shared it on social media when they were a highschooler) needs to stop.

People need to be held accountable for legitimate wrongdoing, but for the love of pie, who has time to go through their entire social media history and update it every so often to match contemporary sensibilities?