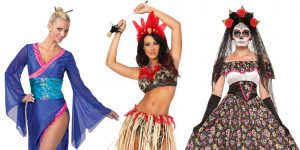 A few years ago, American Halloween traditions included reruns of Michael Myers movies, buying jumbo packs of candy corn to ceremoniously throw out on November 2nd, wondering if you should include packs of dental floss with your mini snickers to hand out to trick-or-treaters, and tactfully navigating the “should Christians celebrate Halloween debate” without losing any friends.

Now that it’s 2018, we can add another tradition to our list: being scolded from the left for politically incorrect costumes.

Now, if you’re a normal person with more important things to worry about than whether or not your 7-year-old is committing a microaggression when donning that feathered headdress or Moana outfit, you may be able to skate through October without any severe talking to’s.

But if you’re on a college campus, you’re unlikely to pass by the fall holiday without some serious finger-wagging.

And, in the case of a growing number of university campuses, this will come right from the top.

Gonzaga University Vice President for Student Development Judi Biggs Garbuio and Gonzaga Student Body President Athena Sok, cautioned the student body on Thursday against “cultural appropriation” during Halloween in a campus-wide email, that has been obtained by Campus Reform.

Halloween “has also become known for more dangerous and damaging traditions like binge drinking, sexualized or culturally inappropriate costumes, and vandalism,” Garbuio and Sok wrote to students. “We urge our community to be aware of the potentially harmful impact insensitive behavior can have on fellow students, other members of the Gonzaga community, and our Logan neighbors.”

“One of these behaviors is cultural appropriation — the act of taking or using things from a culture that is not your own, especially without showing respect of [sic] that culture.”

I’m sorry, did she seriously just put “cultural appropriation” in the same category of dangerous as binge drinking?

This is everything wrong with American universities in a nutshell. Kids go to college to prepare themselves for the real world, a real world in which binge drinking is certainly more dangerous than offending a minority group.

Not to mention, the real world is also a place where there aren’t always people to write letters warning others against offending you.

It’s also a real world where, hopefully, people can loosen up and enjoy a silly day like Halloween without constantly making everything political.

The scary thing is, these students will one day rule the world. And we can only assume that by the time that happens, no one will be having any fun at all anymore since apparently everything fun and funny offends someone.