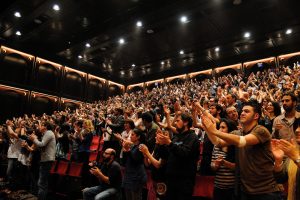 If you thought American universities were bubble-wrapped safe spaces for sensitive little snowflakes to be delicately shielded from anything that might every hurt their precious widdle feelings, take a look at British universities.

They are now considering replacing clapping–yes, clapping, as in, giving someone a round of applause for doing something impressive on stage–with “jazz hands” or “British Sign Language (BSL) equivalent – a wave of both hands,” according to the BBC.

Student union officer Sara Khan is proposing the move to make the University of Manchester a safer space for autistic students or those with hearing and anxiety issue, explaining that the “jazz hands” would create an “environment of respect.”

“I think a lot of the time, even in Parliamentary debates, I’ve seen that clapping, whooping, talking over each other, loud noises, encourages an atmosphere that is not as respectful as it could be,” she explained, adding that eliminating clapping would make school events more…say it with me now…inclusive.

Khan did not mention what to do when unshaven pink-haired feminists want to shut the campus down with their banshee screams and bullhorns in the event that someone slightly right of center sets foot on campus, though.

Not everyone is a fan of the move, including commentator Piers Morgan, who is often a critic of British PC culture.

I think it’s all well and good to consider the needs of autistic and anxiety-prone students, but wouldn’t it more productive to make sure these students can work up to handling the challenges of being on a college campus, rather than changing the age-old practice of CLAPPING to suit their needs?

What if someone drops their binder? What if the jazz hands freak an autistic student out? What if they dare step foot off campus and enter into the rest of the world where people are still clapping?