University Of Kansas Offers A Humanities Class On The Rise Of The Angry White Male. No, We’re Not Joking 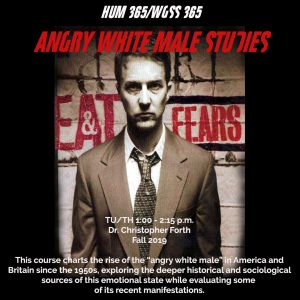 In the latest piece of evidence that universities are little more than manufacturing plants of pseudointellectual lemmings, the University of Kansas Humanities department is set to offer a class on the “rise of the ‘angry white male'”.

Yes, you read that right. For just a few hundred dollars per credit hour, you too (or your kids) can get a top-notch introduction to the only acceptable forms of sexism and racism: those that target white guys.

Classes at their Lawrence, Kansas campus will begin in fall 2019, so be there or be square.

The “Angry White Male Studies” class “charts the rise of the ‘angry white male’ in America and Britain since the 1950s, exploring the deeper sources of this emotional state while evaluating recent manifestations of male anger,” according to KU’s Humanities Program website.

Well, that’s sure to be an enlightening subject and not at all biased or prejudiced.

In a tweet earlier in the week, Republican Kansas Rep. Ron Estes criticized the divisive, discriminatory nature of the class:

Instead of a course to unite people and empower women, KU has decided to offer a class that divides the student population and could pose a Title IX violation by creating a hostile campus environment based on gender. #ksleg https://t.co/XhUNfpFUcW

The 300-level class plans to use “interdisciplinary perspectives” and explore “how both dominant and subordinate masculinities are represented and experienced in cultures undergoing periods of rapid change connected to modernity as well as to rights-based movements of women, people of color, homosexuals and trans individuals,” according to the course description.

Of course, the class is clearly little more than political agenda-driven indoctrination, but you can’t help but pity the kids who are digging themselves into debt to receive this kind of “education”. What a waste of a young mind.