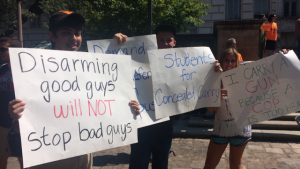 It’s nice to see for once the administration at a public university actually standing up for the constitutional rights of their students, although they certainly did so in the face of some very…crazy behavior from a progressive instructor.

A graduate student at the University of Utah who had been assigned to teach a class this fall has now been removed the classroom and assigned to further training in campus policy after creating a syllabus that said students who brought legally concealed weapons to class would be restricted to a “Second Amendment zone” in the back of the class.

The policy stated that any gun-carrying students would have to stand in the back of the classroom together inside a “3×3 taped square on the floor.”

Campus Reform reported the instructor called the taped square “the Second Amendment zone” and suggested any students who brought a concealed-carry gun to class was exhibiting “absurd, antisocial, and frightening behavior.”

The teaching assistant also explained her belief that because the University of Utah has restricted “free speech zones,” her classroom would have the same, but for Second Amendment rights.

“If you feel that it is somehow at all appropriate to bring a gun to class (hint: it is not — this is absurd, antisocial, and frightening behavior), you are restricted to spending your time in class in my ‘second amendment zone’ a 3×3 taped square on the floor in the very back of the classroom, that will be shared with all other gun carriers,” she added.

The instructor went on to accuse concealed carry gun owners of disrespecting her and their fellow classmates’ “personal and psychological safety,” and explained she would be denying them a desk in light of their disrespect.

“This zone also does not include a desk, because desks are reserved for students who respect the personal and psychological safety of their classmates and instructor,” she wrote.

Let’s stop here for a minute.

This woman was clear she’s terrified of guns…but does she actually know how a gun works? How is sitting right next to a person with a lawfully concealed firearm any safer than sitting 20 feet away from them?

Anyway, fortunately for the CCHL students assigned to this crazy lady’s class, school administrators stepped in after students contacted a Karianne Lisonbee, R-Clearfield who put the syllabus on her Facebook page.

This attracted quite a bit of backlash and drew attention to the blatant legal violation of this classroom policy, as Utah is the only state in the nation where it is straight-up illegal to ban guns from the classroom (note to self: send kids to college in Utah).

“I have been assured that this teacher has been reprimanded for publishing a syllabus against University policy. She was asked and has issued an apology to her students,” she wrote.

While sometimes it can feel like you’re being a broken record by drawing attention to the insane liberal bias on college campuses, this story is a good reminder that it’s always worthwhile to point out when student’s constitutional rights are being infringed by the faculty of a publically-funded university.

Good on Univ. of Utah for setting this straight.