Unhinged Peter Fonda Calls for Baron Trump to Be “Locked in a Cage With Pedophiles”, and More Crazy, Abhorrent Things 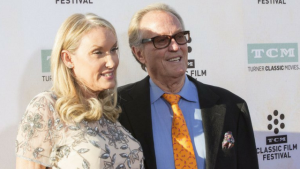 Please excuse me for saying so…but what in the h-e-double hockey sticks is wrong with leftist?!

Do they honestly think that turning the vulgarity and vitriol up to 11 is going to win hearts and minds?

No. Their ill-informed anger is constantly stoked by a sensationalist, agenda-driven media and they end up just word vomiting all over Twitter and looking like callous, tone-deaf, foolish jerks.

And no one is typifying this better this week (…so far) than actor Peter Fonda, the younger brother to equally unhinged Jane Fonda, who was quite cozy with the Viet-Kong in the 60s as you may remember, which gives you a little background into their apparent family values.

Early Wednesday morning, in a tweet storm inspired by the selective outrage du jour i.e. children being separated from their parents at the border which leftists just found out about five minutes ago despite the fact that it’s been happing literally for years, Fonda absolutely took the cake for the most abhorrent, disgusting argument from the left.

Words cannot describe how far he went, so I invite you to simply observe (warning: explicit language):

While this tweet is stunningly still up, he deleted the following tweet apparently, which said “[DHS director] Kristjen Nielsen is a lying gash that should be put in a cage and poked at by passersby. The gash should be pilloried in Lafayette Square naked and whipped by passersby while being filmed for posterity.”

I’m not entirely sure what a “g***” is, but Peter Fonda informs me it’s worse than the c-word and Amanda Prestagiacomo over at the Daily Wire censored it in her coverage of this outrageous tweet storm, so I’m guessing it’s pretty offensive.

On top of calling for a pre-teen boy to be sexually abused, a woman to be whipped publically naked, and another woman to be separated from her children and put in the care of Steven “Goebbels” Miller (this actually isn’t that outrageous, except that Fonda apparently thinks that Trump advisor Miller looks like Nazi Joseph Goebbels which clearly makes Miller evil, right? #logic), he went on to call for violent revolution, because why not?

Almost all these tweets, Prestagiacomo notes, are still up on Twitter. Because of course they are.