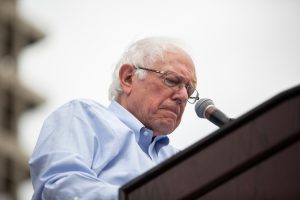 Poor, poor Bernie Sanders. He clings so tightly to a socio-political system that has utter failure embedded in its very DNA. When that failure manifests itself, one is almost tempted to feel sorry for the guy.

Except, you know, socialism is a bleeding heart facade for authoritarian crooks, so any temptation to sympathize is pretty quickly cut down.

Most recently, Bernie’s effort to practice what he preaches and pay his 2020 presidential campaign staffers a minimum $15-per-hour wage landed him in hot water after cutting staffers hours to make the math work.

Now, according to an announcement made late Monday night by the National Labor Relations (NLR) Board, the Sanders campaign is under fire for allegedly conducting illegal employee interrogations and retaliating against staffers.

Bloomberg Law reports that “A copy of the charge has not yet been made public, but the agency’s July 22 docket lists five potential violations of the National Labor Relations Act.”

From the National Labor Relations Board website, here are the charges:

This complaint, filed on July 19 by an individual in Indiana, is the last thing Bernie needs after the still-fresh fiasco of getting creative with his staffers’ schedules and then having the nerve to complain that they went to the press about it.

“It does bother me that people are going outside of the process and going to the media,” said Sanders, according to The Des Moines Register. “That is really not acceptable. It is really not what labor negotiations are about, and it’s improper.”

During his Monday podcast, the Daily Wire’s Michael Knowles utterly shredded Sanders’ glaring hypocrisy, and it was glorious:

The trouble is the hypocrisy. The trouble is Bernie is running on a $15 minimum wage, and he won’t extend that courtesy to his own employees. So last Thursday night his staff leaks this story to the press. That they’ve unionized and they’re fighting for the $15 minimum wage. Bernie, the fake union champion, is fighting them on it. He’s trying to crush their union. After these leaks to the press, it gets even better because the Bernie campaign responds and says it is disrespectful to the bargaining unit that put so much work into this process that someone would take their concerns and go to the press. Whatever happened to “democracy dies in darkness”?! Whatever happened to transparency?! Get it all out there! Very different when it affects a left-wing campaign.

As for what will come of these charges, “any person” is allowed to file a complaint with the NLR Board, the board’s website explains, so it is not yet clear whether they will find merit in the claims.

“The charge filing will initiate a preliminary investigation by the labor board’s Indianapolis office to determine if there is merit to the allegations,” Bloomberg Law adds. “The board’s lawyers will then decide whether to move the case forward or dismisses it.”

I’ll be on the edge of my seat waiting to see how this one turns out.