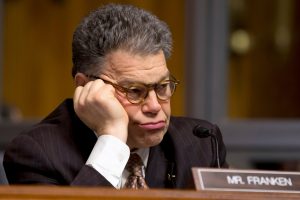 One of the first major casualties of the #MeToo movement was SNL alum and then-Senator Al Franken, whose history of pawing (sometimes unconscious) women was brought to light.

Allegations came forward from an actress he had worked with on a USO tour in 2006 that he had both forcibly kissed her, and then later taken a picture of him appearing to fondle her as she slept. Not long afterwards, a handful of other women came forward claiming they had also been groped by Franken, which launched a Senate investigation.

Franken ended up resigning, but he seems to join other Democrats, like Obama or Hillary Clinton, who clearly don’t consider themselves to be out of the political arena simply due to the inconsequential fact that they no longer hold any kind of public office.

Franken has been relatively quiet since his disgraced resignation, but apparently, relatively moderate Justice Kavanaugh’s nomination to the Supreme Court was just too much for him to handle.

The world, Franken clearly seems to believe, was in sore need of even more hyperbole about the apocalyptic implications of an originalist on the Court!

Franken, who has not changed his Twitter handle from “U.S. Senator Al Franken,” despite resigning from office amid a series of sexual harassment allegations, announced his opposition to Kavanaugh on Saturday in a post to Facebook.

What follows is a fever dream in which Franken “nails” Brett Kavanaugh for a comment Kavanaugh made during his official introduction last Monday, suggesting that President Donald Trump presided over a thorough and extensive vetting process, and that “no president has ever consulted more widely, or talked with more people from more backgrounds, to seek input.”

Franken concludes by noting that he “knows” precisely what would happen in the exchange: that Kavanaugh would reveal he was selected “through a shoddy, disgraceful process” conducted using resources from those nefarious, shady conservative groups, the Federalist Society and the Heritage Foundation, and that Kavanaugh has worked, from the beginning, as if pushed by a vision of a future where Donald Trump nominated him to the Supreme Court, to cover his tracks as an utterly partisan official.

Oh, the horror of a Supreme Court Justice that interprets the Constitution as it was written!!!

How will we restore our nation to a progressive, culturally Marxist paradise with one of those in the highest court in the land?

You can tell Franken is feeling pretty bitter he threw himself on the sword and resigned to save face for the Democrats and now doesn’t have the opportunity to join in all the brouhaha over Kavanaugh’s nomination, especially considering Dems are pretty much powerless to stop his confirmation, anyway.

Sorry, Al! Maybe you can try another USO tour?