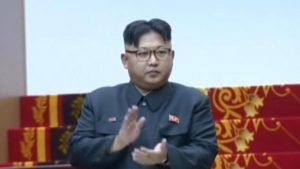 Well, it seems North Korea is up to their old tricks again, deciding to follow through with plans to expand its ballistic missile program at 16 secret sites.

Will Kim Jong Un ever learn his lesson? It seems the answer to that question is a big, fat “NO.” You can’t trust a single thing that comes from anyone in that corrupt dictatorship. Shocking, right?

Ben Shapiro breaks it down.

In all likelihood, this finding relates to the United States’ recent decision to pull out of a high-level negotiation between Secretary of State Mike Pompeo and North Korea’s Kim Yong Chol last week.

None of this is any shock, of course. North Korea has relied on deception with regard to the West for decades, lying to Presidents Clinton, Bush, Obama, and now Trump about their intentions to disarm. But North Korea’s regime has no intentions of disarming. In fact, thanks to President Trump’s much-ballyhooed summit with Kim Jung Un, the North Koreans have an even larger stake in maintaining their nuclear and missile programs: they know that those programs are all that stand between them and the possibility of a coup attempt by allies of the West. It was North Korea’s nuclear program that earned them a seat at the big boy table with the United States in the first place.

This was always the danger of Trump’s strategy with regard to North Korea. As I stated at the time, making nice with the world’s worst dictator – praising him as a reformer, painting him as a moderate, talking about his strength – has serious consequences for forces inside and outside North Korea attempting to work against the regime. Trump legitimized the regime.

At this point it’s still too early to call Trump’s strategy with North Korea a complete failure, but you sure can’t call it a success either.

Part of the problem with the political right is that they are so used to having to be on defense from the left’s wacky attacks against Trump that they’re hesitant to hold him accountable for his actions when they aren’t necessarily good approaches to a particular issue.

Let’s hope this situation gets resolved without the need for further escalation of tension between North Korea and the United States.