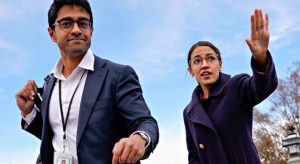 Things are looking a little bit dicey over at Camp AOC, y’all!

I may not be that much smarter than a wet hammer, but maybe this has something to do with Chakrabarti’s sudden blowing of the AOC hot dog stand. Just a theory.

The two PACs being probed, Brand New Congress and Justice Democrats, were both set up by Chakrabarti to support progressive candidates across the country.

But they funneled more than $1 million in political donations into two private companies that Chakrabarti also incorporated and controlled, according to Federal Election Commission filings and a complaint filed in March with the regulatory agency.

In 2016 and 2017, the PACs raised about $3.3 million, mostly from small donors. A third of the cash was transferred to two private companies whose names are similar to one of the PACs — Brand New Congress LLC and Brand New Campaign LLC — federal campaign filings show.

While a smoking gun has yet to emerge, as Fox News reported, the FEC only initiates investigations based on complaints filed by outside organizations if there is sufficient evidence that a violation did occur. In other words, where there’s smoke, there’s fire.

The Post also states that the investigation will also touch on the motive behind AOC’s unusual salary rules for her office staff. Back in March, she announced that none of her staffers would make less than $52,000 or more than $80,000 per year.

By limiting Chakrabarti’s salary to $80,000 (where most other congressional chiefs of staff earn upwards of $140,000 per year), AOC effectively allowed Chakrabarti to avoid FEC rules that require any staff members earning more than $126,000 to report any income from other sources.

As a side note, Ocasio-Cortez and Chakrabarti were both silently removed from the board of Justice Democrats back in March following the filing of NLPC’s complaint.

But I’m sure it’s just a coincidence.