TX Sen. Ted Cruz Joins Up With ‘People’s Convoy’ To Take A Ride Around DC Beltway 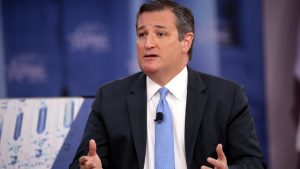 Texas Sen. Ted Cruz, a Republican, joined up with the “People’s Convoy” Thursday and rode “shotgun” as drivers headed to the Capital Beltway for the fourth time this week as a means of protesting against COVID-19 health restrictions that are still in place around the country.

Rosas then tweeted a picture of Cruz chilling out in the passenger seat of one of the vehicles in the protest.

The senator later tweeted, “God bless The People’s Convoy!” with a photo showing him addressing the crowd.

Cruz and Sen. Ron Johnson, R-Wis., met with participants on Tuesday to discuss their demands and grievances. The convoy of big rigs, RVs and pickups had been tying up traffic on the Capital Beltway outside Washington since Sunday in an effort to end the state of emergency that led to overreaching mandates.

The group rested on Wednesday due to rainy weather and concerns about safety on the roads, the Post said.

Group organizer Brian Brase said the convoy Thursday would be going into D.C. to meet with more lawmakers, adding that it was a bit of “cold calling.”

“There ain’t no ignoring a senator riding in the lead truck,” Brase stated, which then garnered enthusiastic cheers, The Washington Post reported. “That’s basically an endorsement of what we’re doing.”

“Defense Secretary Lloyd Austin on Monday agreed to extend National Guard support in Washington, D.C., due to the truckers’ presence. Capitol Police leaders reportedly were worried about the possibility of the convoy causing shutdowns of various roads and highways in the D.C. area,” Newsmax reported.

Organizers for the convoy have managed to get a lot of support by calling the COVID mandates an infringement of their freedoms. Which is an absolutely correct description of them. The left has politically capitalized on the pandemic to gain power and authority and they simply do not want to let that go.

“Brase, a 37-year-old trucker from Ohio, said the convoy will continue to protest until mandates for health workers, federal employees, and military personnel are eliminated, the Post reported,” Newsmax went on to say in its report.

“[Cruz is] gonna at least lead the convoy out the gate and down the road,” Brase remarked, the Post said.”He may stick with it. I’m not exactly sure; it’s up to him, his security staff, and what they decide to do.”

Another one of the organizers, Mike Landis, stated that he expected Cruz to ride shotgun in the truck.

“It’s a pretty big honor,” Landis went on to say about giving Cruz a lift, the Post reported.