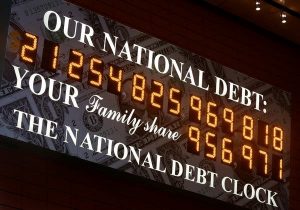 In spite of a long-standing movement within Congress to attempt to limit its own gargantuan spending, the national debt continues to skyrocket beyond any reasonable justification.

Rep. Chip Roy (R-TX) might not be able to solve the debt problem, but he sure as hell wants to put an end to the congressional habit of pretending it doesn’t exist.

On Tuesday, Roy introduced a bill into the House calling for the installation of real-time debt clocks in the main meeting rooms of the House Budget Committee and House Appropriations Committee so the bastards can no longer hide from the burden they’re placing on Americans (and our great-great-great grandchildren).

“The fruits of our nation’s fiscal irresponsibility was on full display this month as we topped $23 trillion in debt,” Roy said in a press release about the bill, House Resolution 686. “In response to such a sad achievement, I introduced a simple piece of legislation titled the ‘Know Debt Resolution’ … it is quite clear to me that if Congress ever intends to eliminate the national debt, we need to at least know what the national debt is.”

HR 686, simply titled “The Know Debt Resolution,” calls on the House clerk to install a display onto the walls of the two separate meeting rooms.

The resolution aptly states that the country’s “national debt is the greatest threat to the national security of the United States.” This is no exaggeration considering that we accrue $100 million in debt every single hour, leading to a projected federal deficit of $1 trillion in 2020.

“As we all know — the first step in correcting behavior is realizing there is, in fact, a problem,” Roy continued. “The purpose of putting a debt clock in both committee rooms is to force members of Congress to recognize that we have a problem.”

“Congress continues to spend money that we do not have, borrowed on the backs of our children, our grandchildren, and our grandchildren’s children. We are mortgaging our progeny’s future for a present we cannot afford,” he added. “Most Republicans and Democrats in Washington have found something they can regularly agree on in a bipartisan basis — increased spending across the board.”

“A debt clock — strategically placed in the very locations where Congress exercises its Article One power to appropriate and budget is a common-sense step towards a course correction in the disastrous journey that both the Republicans and Democrats have plotted for the American people over the past many years,” Roy continued in his statement.

“I’m proud to have stood up for fiscal sanity since entering the halls of Congress. It is high time for Congress to take seriously the issue of our skyrocketing national debt,” he added. “I plan to continue fighting for a balanced budget, reduced spending and ensuring that I can pass down an America to my children and grandchildren that is freer than the one I inherited from my parents and grandparents.”

My only question is how much are these clocks going to cost?