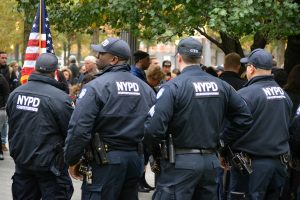 Sorry for the shocking headline, but this bill is unnecessary and deliberating and passing it will be a waste of already strained taxpayer dollars.

Now, to be clear, I’m a proud-ish resident of Mayberry-esque upstate New York, where the vast majority of citizens and police get along just fine without tasing each other or busting out the Super Soakers.

But, as a New Yorker, I’m gonna go out on a limb and say that the new bill that seeks to criminalize the act of “dousing” on-duty cops is wrong.

I hope you’ll hear me out, but first, here’s some context in case you missed it, courtesy The Daily Wire:

On Wednesday, speaking at a rally on the steps of New York City Hall, two New York legislators said they want to implement laws that will punish people who douse police officers with liquid. Assemblyman Mike LiPetri of Long Island and Assemblyman Michael Reilly of Staten Island are proposing a bill that would make it a class E felony to throw or spray water or other liquids against an on-duty police or peace officer. The perpetrators would serve between one and four years in prison.

According to CBS New York, LiPetri declared that “What we are witnessing in New York City is disgraceful. A culture of blatant disrespect for law enforcement has been fostered and encouraged simply for political gain which has resulted in such despicable acts of hate becoming acceptable in our communities. New York State must send a message that this will not be tolerated and I am confident that this bill provides law enforcement the tools they need to properly react.”

Reilly added, “Our police officers are being targeted for harassment and even assault while doing their job. This is the direct result of political grandstanding from politicians like Mayor de Blasio who’ve done absolutely nothing to foster police-community relations, and instead spread an inflammatory anti-cop rhetoric just to score a few points. As someone who served in uniform, I understand the immense burden our police officers carry with them each day. I take offense to the narrative created by those politicians and the truth is, Mayor de Blasio was elected to lead a city, not a movement. It is time for real leadership at City Hall.”

Michael O’Meara, president of the Metropolitan Transportation Authority Police Benevolent Association, asked, “When did we lose our common sense? When did it become okay to laugh and jeer and throw things at police officers who are working and trying to protect our communities? Maybe Mayor de Blasio should sit down and address the people of New York City and say, let’s get some common sense back. Come on, it’s disgusting.”

“This time, it’s water. What’s next? Gasoline? Acid?” LiPetri added. “What we are witnessing in New York City is disgraceful.”

Now, on nearly every single point, I wholeheartedly agree with these gentlemen. Where I’ll diverge is, of course, when they begin grandstanding and declaring that we need new legislation to address the insanity of New Yorkers assaulting police officers.

Folks, dousing officers is assault, and we already have laws against that.

But whatever the preferred liquid projectile, the act of dousing someone with it meets the legal standard for assault; which includes any unwanted physical or “offensive contact.” And to the police officers subjected to these outrageous attacks, how is one to make the immediate determination that the aggressive liquid-hurler isn’t tossing a bucket of acid, or bleach, or infectious waste in their faces?

In his op-ed, Gagliano also pointed out the “permissive environment” promoted by NYC mayor and presidential hopeful Bill de Blasio:

Mayor Bill de Blasio described the conduct as “completely unacceptable,” and retired Chief of Department, Louis Anemone, a fiery 34-year NYPD veteran, parried with an open letter blaming “the ‘woke’, ‘progressive’, political establishment of New York City,” for replacing “common sense, impartiality, and honesty in the pursuit of happiness in the City with crazy theories about our sub-conscious prejudices and minority privilege.” Addressing the mayor, he wrote: “Resign now.”

Indeed, there is a case to be made that the attacks on these cops who were simply doing their jobs stem from a more permissive environment tolerated in de Blasio’s New York — one that can sometimes seem to preference “de-escalation” over accountability and the rule of law.

What New York City cops need is stronger leadership and city prosecutors to grow a backbone. We don’t need to mull over another piece of legislation when dousing cops is already illegal.

We need to actually enforce the laws we already have.