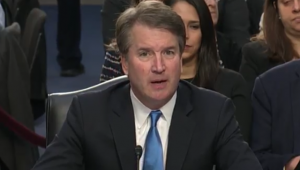 As if things couldn’t possibly get any crazier with the Brett Kavanaugh confirmation hearings and the allegations against him of sexual assault, two men have come forward claiming they are the ones who assaulted her during a house party in 1982, not the SCOTUS nominee.

The two men spoke with the Senate Judiciary Committee where they admitted to the attack.

On Monday, the timeline recounts GOP staff members interviewing “a man who believes he, not Judge Kavanaugh, had the encounter with Dr. Ford in 1982.”

The “encounter” refers to an episode in which Ford claims that Kavanaugh sexually assaulted her in a bedroom at a Maryland house party.

They had a follow-up interview with that man, and he provided more detail about the assault.

Then on Wednesday, the committee staff said they spoke with a second man who said he assaulted Ford in 1982.

The committee did not release any more details about the men, or why both were coming forward with the claims.

If this is true, and they find evidence to corroborate the men’s claims, then Kavanaugh deserves the world’s greatest apology and to be confirmed in his seat without any further problems.

There’s a ton of holes in Ford’s story and the contradictions continue to grow on a daily basis, so who knows what really happened. The only thing that looks likely right now is that Kavanaugh is being wrongfully accused.

That’s at least the direction things point toward as of now. What a sad time in America where you are assumed guilty without the presentation of evidence.