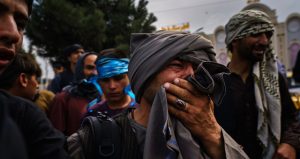 According to new reports coming from the Pentagon, there were at least two explosions that went off near the airport in Kabul, Afghanistan on Thursday, with both civilians and military service members among the casualties.

John Kirby, spokesman for the Pentagon, stated that one of the blasts hit near the airport’s Abbey Gate, while the other close to the Baron Hotel. Two officials stated that at least one of the explosions was the result of a suicide bomb.

“We can confirm that the explosion at the Abbey Gate was the result of a complex attack that resulted in a number of US & civilian casualties,” Kirby went on to say in a post published on twitter. “We can also confirm at least one other explosion at or near the Baron Hotel, a short distance from Abbey Gate.”

A Taliban official said at least 13 people were killed in the blast, including children, and many Taliban guards were wounded.

A U.S. official told Reuters as many as three U.S. service members were among those hurt, and that U.S. casualty numbers were expected to increase, according to initial information. At least one of the U.S. personnel was seriously hurt, an official said.

The U.S. Embassy in Kabul described “a large explosion” and said there had been reports of gunfire.

The explosion came after the United States and allies urged Afghans to leave the area because of a threat by Islamic State.

An official in the White House has revealed that President Joe Biden has been briefed on the explosion. The president was in a meeting with his security officials about the situation that is currently unfolding in Afghanistan where the U.S. is soon to wrap up its 20-year war, when the first explosion was reported.

This is just further evidence that the choice made by Biden to pull U.S. military troops out of the country was a bad, bad idea. Now his decision has cost lives. When is he going to be held accountable for what he’s done?