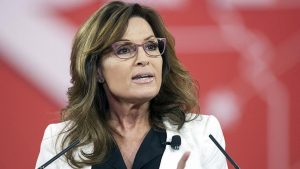 The internet seems to have made cold-hearted cynics out of many people.

This definitely isn’t partisan, and I’d be lying if I said conservatives and people on the right don’t go a little too far sometimes when it comes to mocking or trolling progressives or liberals.

However, it’s hard to deny that there is a particularly brutal bend to left-wing trolls, who tend to be far more vulgar in their attacks on people they perceive to be evil, cruel bigots.

This was on full display when Sarah Palin, the former Vice-Presidential candidate and governor of Alaska, with whom the American public has a love/hate relationship that lines up pretty consistently with party affiliation, shared on Twitter that her house had been damaged in Friday’s earthquake.

Thankfully, Fox News reports, there have not yet been any serious injuries or deaths reported, but there is quite a bit of damage following the 7.0 that hit near Anchorage Friday morning.

“The impact is very real, the impact is very hard, and it will require apparently a great deal of recovery and effort,” explained Alaska Sen. Lisa Murkowski, according to Conservative Tribune.

“There are homes without power. There is some concern that you may have gas line breaks that could lead to potential further disasters.”

Palin explained that her home was among those damaged, but was thankful her family was safe:

🙏🏼 for Alaska. Our family is intact – house is not… I imagine that’s the case for many, many others. So thankful to be safe; praying for our state following the earthquake.

Proof that there is a God?

Good. You deserved that.

I'm very glad your family is safe, also that you have to deal with what your partys pro oil drilling stance does to poor people. Maybe now you'll take a stand against efforts to increase drilling in Alaska? But prolly not.

So sorry! Perhaps you’ll begin listening to science and climate change. It’s been knocking at your door

Meanwhile, Americans are in desperate need. Imagine if these trolls just sent five dollars to recovery efforts instead of expending this energy on being bashing a woman with far better things to worry about that what her classless Twitter trolls have to say.

It’s important to contrast Palin’s experience on Twitter with that of outspoken conservative actor James Woods, who, when he saw on Twitter that outspoken progressive actress Alyssa Milano was desperately seeking assistance during the California wildfires, retweeted her request for help rather than mock her.

Be like James Woods, whether it’s a progressive or a conservative who is facing disaster.