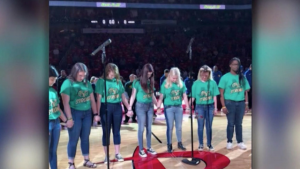 It has been just over two weeks since our nation was once again rocked with the despicable acts of a single young man who made the unthinkable decision to murder his teachers and peers in Santa Fe, Texas.

As the community struggles to cope with this tragedy of unthinkable proportion, SJWs on Twitter, perhaps upset that the Texas community isn’t as eager to push the gun control agenda as Parkland was, apparently have nothing better to do than accuse the survivors of racism.

These are high school students who did nothing more than pay tribute to their deceased classmates, and yet Twitter felt the need to falsely and arbitrarily accuse a group of young women of singling out their black friend.

The Blaze has the story:

Prior to the start of Game 5 in the NBA’s Western Conference finals between the Houston Rockets and Golden State Warriors, the NBA invited Santa Fe High School seniors and first responders to the game, according to KHOU-TV.

The senior students gathered on court together to sing the national anthem and hold a moment of silence for the 10 lives lost at their school on May 18 in a shooting massacre.

Afterward, the NBA posted a picture of the girls to its Twitter account, where it garnered a lot of attention for all the wrong reasons.

One tweet that passive aggressively questioned why the black girl’s hands weren’t held garnered nearly 40,000 retweets and more than 100,000 “likes.”

But why is Nobody holding the black girls hand…. https://t.co/zfmhvqY3sw

The young woman, in question, was quickly and vehemently defended by none other than her mother, who was aghast that anyone would twist such a poignant moment into something so ugly.

She fired back in epic mama bear proportions:

The "black girl" is my daughter. It's people like you that keep the race crap stirred up. You just look for ways to make things about race. These girls are her friends. You have no idea what you are talking about so you just need to shut up.

As to why Nicole, the young woman in question, was not holding hands with her friends, Lynda gave a simple and understandable answer:

my daughter didn't want to cry before she had to sing and holding hands would have caused her to start crying that's the story nothing about race.

“When Nicole came out of her room Saturday morning, she was upset that they had turned this into a race thing, because she knew what was real. To make something so simple into a race issue was just absolutely ludicrous,” Lynda said, according to The Blaze.

“It’s very disappointing that people are going to take a race issue out of a picture with nine grieving girls in it. I grieve in my own different way. I don’t like to be touched. When we had that moment of silence, I didn’t want to grab anyone’s hands because I didn’t want to break down before we sang [the national anthem],” Nicole added.

Someone dared to question Lynda’s relation to Nicole, which she quickly shot down as well:

I have a birth certificate which you will not be seeing. This is us at senior parent night for band. pic.twitter.com/LQA4D83nxq

Finally, one twitter user crossed a serious line when they asked how Lynda, a white person, is able to teach her daughter about racism through “all her privilege.”

Her response was perfect:

I let her read these post. Y'all are doing a damn good job.