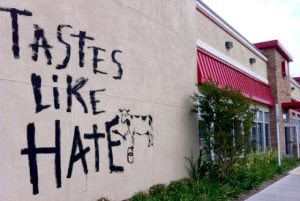 Imagine if any of these people ever had any real problems?

America is a pluralistic society. At least, it’s supposed to be. Where one can adamantly disagree with someone about something but still enjoy their delicious chicken sandwiches without betraying your own personal values, right?

Well, apparently Twitter founder and CEO Jack Dorsey cannot. Nor can the entire left, who seemed to gang up to jump down Dorsey’s throat for daring to purchase said delicious chicken sandwiches, particularly during the High Leftist Holiday of Pride Month.

The Washington Free Beacon reports that Dorsey inadvertently exposed his own carnal sin when he shared on Twitter that he’d used the Boost app to save money at Chick-Fil-A.

We will for the time being ignore the fact that this dude founded Twitter and clearly has absolutely no need to save money. Although we can’t blame him for opting for the affordable and delicious cuisine of Chick-Fil-A despite clearly being able to afford more expensive chicken sandwiches.

This is an interesting company to boost during Pride month, @jack https://t.co/Wmhq6Obrp1

You pull this during #PrideMonth , @jack? Really?#EmptyThePews #Exvangelical #LGBTQ https://t.co/9sVZZvze2m

Chick-fil-A funded several anti gay marriage groups and has a long history of bigoted hiring and firing practices. Speak with your money and spend your money in ways that help promote lgbt Americans in positive ways. Other companies sell chicken that don’t hate you. pic.twitter.com/xX7X89TeoE

And the angry demands:

Please delete this or follow up with how much free advertising you're going to give GLAAD.

Dorsey quickly responded that he had “forgot about their background.” That is to say, he totally spaced that he, as a card-carrying liberal, was verboten from eating at Chick-Fil-A because LGBT.

This was an inefficient apology for some:

the original tweet is still up there and the fact that he can't remember their horrible anti-LGBT history is emblematic of the white cishet male worldview that almost never thinks about minority communities, I'm so sick of him, Zuck and Bezos

(Note to self: scratch that. You don’t care.)

The comments and bickering on the original post are honestly quite laughable. It’s clear no one was as offended by Dorsey’s choice of fast food as they were excited to boost their own moral righteousness by faux outrage.

This is the bread and butter of the progressive left, and their lives would honestly feel meaningless without it. In the Middle East, ISIS has been throwing homosexuals off buildings and several Islamic governments still institutionally punish and imprison members of the LGBT community.

But a massively rich guy who founded a social media network that you all use to make yourselves look better just shopped at a restaurant that serves anyone and has delicious chicken, so why not go for that low-hanging fruit instead of direct your outrage towards people who are actually persecuting people?

Ugh. Some days I just can’t.