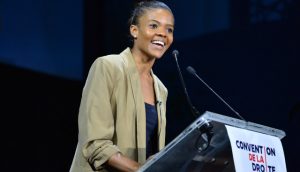 On Friday, conservative powerhouse Candace Owens was booted off Twitter after having the audacity to stand up to a dictatorial, big-government goon drunk with power. No, we’re not talking about Kim Jong Un. Owens stood up to Michigan Gov. Gretchen Whitmer for her overreach in the restrictions she has placed on her people amid the COVID-19 crisis, going so far as to encourage protesters to continue putting pressure on her administration.

This, of course, did not sit well with the powers that be on Twitter, who then kicked her off the platform.

“Apparently [Whitmer] believes she is a duly elected dictator of a socialist country,” Owens wrote in the now-removed tweet. “The people of Michigan need to stand up to her. Open your businesses. Go to work. The police think she’s crazy too. They are not going to arrest 10,000,000 people for going to work.”

Reporter Benny Johnson captured a screenshot of Owens’s tweet and asked what rule she was guilty of breaking by simply stating that people in Michigan need to get back to work.

Candace Owens has been suspended from Twitter.
Candace tweeted that people in Michigan should go back to work.
What rule did she break?
Not even Twitter can say.

Candace Owens tells people to work and gets cancelled but AOC can tell people *not* to work and all good pic.twitter.com/4tCH3ibUcW

Owens has responded to Twitter’s locking her out of her account with a statement delivered to The Washington Examiner, stating:

“I unequivocally stand by every single word of my tweet,” Owens told the Examiner. “If Alexandria Ocasio-Cortez can use Twitter’s platform to encourage workers to walk out and boycott — I should be allowed to encourage lawful citizens to resume work. The only person breaking any laws is governor-turned-dictator Gretchen Whitmer, who is impoverishing millions, ignoring the votes of her state legislature, and as a result, rolling over the constitutionally protected rights of Michigan citizens.”

“Twitter was unable or unwilling to provide me with any specific rule that I violated, which is why I have appealed their decision. While I am not an expert on Twitter TOS, I cannot see how suggesting people ought to work would be a violation of anything other than socialist reverie,” the commentator added.

A few folks came to the defense of Owens and her statement:

The suspension of @RealCandaceO for stating a perfectly valid political opinion goes to show that Twitter, an American company made possible by American freedom & ingenuity, shares many more values with Communist China than it does with us.

Heard from my friend @RealCandaceO that she got banned from @Twitter for simply telling the people of #Michigan they should go to work.

If the Social Media Masters ban you for that w/o an explanation, imagine what they’ll do to try to influence the election given their politics!

Look, the protesters in Michigan have every right to assemble and share their concerns with their governor, especially when the choices that Whitmer are making are destroying their livelihood. The kind of restrictions placed on folks in the state of Michigan are some of the worst in the country, so it’s understandable why folks are so upset.

That being said, forcing your way into the Capitol building of the state while brandishing firearms seems a bit excessive. By all means, protest. But let’s make sure we aren’t giving the left more ammunition — pun intended — to try and justify trampling our Second Amendment rights. They do a good enough job of that on their own without our help.