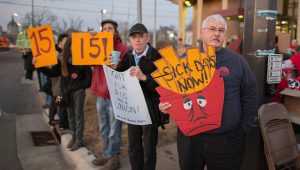 Okay folks, what does fossil-fuel divestment and the minimum wage have to do with our nation’s response to the COVID-19 pandemic? If you said absolutely nothing, then you win the grand prize.

Unfortunately, the grand prize is just a pat on the virtual back. Enjoy.

Yes, neither one of those issues has anything to do with our response to the coronavirus, but that’s not stopping radical leftist students at Tulane from demanding they be included in relief packages.

The Washington Free Beacon obtained a copy of a student-authored letter that claims that left-wing policies are the only way to ensure a safe return to campus. Demands include a $15 minimum wage and divestment from fossil fuels. The “Spring 2021 Demands” letter also reiterates previous calls to abolish campus police and give reparations to the descendants of slaves who worked on the plantation that became Tulane’s campus.

The letter begins by calling on the university to offer virtual-learning options to students and professors as well as a pass/fail grading option until more vaccines can be distributed. Its signatories argue that “having a low income is a health concern” and that the fossil-fuel industry causes hurricanes, which makes CDC pandemic guidelines more difficult to follow.

“The response to hurricanes—evacuation and sheltering in large groups—is inherently incompatible with the response to COVID-19—staying at home and social distancing,” the letter reads. “The fossil fuel industry is directly to blame for the climate change that makes hurricane season worse every year, and it is more urgent than ever for Tulane to divest and stop supporting these companies with its endowment dollars.”

It’s simply astounding that liberals still think it’s a good idea to jack up the minimum wage to $15. If they just applied a little common sense to this idea, they’d quickly see that raising the minimum wage is disastrous for everyone.

You see, when you raise the minimum wage, this means that business owners then pass the cost on to consumers by raising the prices of goods and services. This inevitably leads to an increase in the cost of living.

If only that point could sink in the skulls of these lame-brained college students.